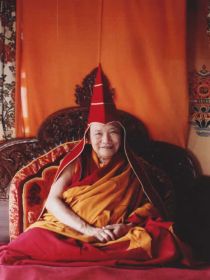 His Eminence Kyabje Trulshig Rinpoche, who has served as the Head of the Nyingma School of Tibetan Buddhism since 2010, passed into Parinirvana on 2nd September 2011 at 8:30 am at his monastery at Sitapaila outside Kathmandu. He was 88 years old.

Kyabje Trulshig Rinpoche Ngawang Chokyi Lodoe, was born in Yardrok Takloung, Tibet in 1923. He was recognized at the age of four, as the reincarnation of his own Heart Lama, Trulshig Tendru Dorje by Abbot Ngawang Tenzin. He was regarded as the reincarnations of many great masters of the past which include Ananda, Aryadeva, Thonmi Sambhota, Shantarakshita, Vairotsana, Dongak Lingpa and Rechung Dorje Trakpa.

His Eminence Kyabje Trulshig Rinpoche studied at Rong Phu with Ngawang Tenzin and took novice vows at the age of 10. Upon the death of his teacher whose wish was for his disciple to succeed him, Trulshig Rinpoche at age 19 took his teacher’s place as Khenpo (abbot) of Dza Rong Phu Monastery. Shortly after, he went to Mindroling College for further teachings. He took gelong vows from Chung Ngawang Chodar Rinpoche and Khyentse Norbu Rinpoche, who were his two main teachers at Mindroling. He also studied with many of the most prominent teachers of the time including Chusep Jetsun Rinpoche, Mindroling Dechen Choenzing and Dudjom Rinpoche.

In 1959, Trulshig Rinpoche went to Nepal and stayed at the monastery in Thame for one year, then moved to Chiwong Monastery for 5 years. He spent many years in retreat and established a monastery at Sengye Puhk (the lion cave), above Thupten Choling on the lower slopes of Shyorung Yul Lha. He later founded the Tubten Choling Monastery which is the largest Nyingma monastery in Nepal today, with 130 monks and 350 nuns.

His Eminence Kyabje Trulshig Rinpoche holds the lineage to some of the rarest teachings, such as "Pacification of the Suffering", first introduced in Tibet during the 11th century by the Indian yogin Padampa Sangye. His ability to find and learn these rare texts has given him the reputation as a treasure hunter.

Having ordained nearly ten thousands monks and nuns over the years, the presence of His Eminence Kyabje Trulshig Rinpoche will be much missed by his devotees from around the world.