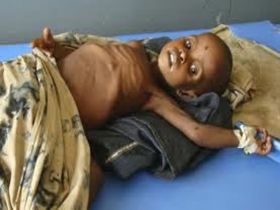 As the drought in the Horn of Africa continues, an estimated 13 million people now face starvation in Somalia, Ethiopia, Kenya and Djibouti. The continued absence of rain is causing the famine to worsen day by day, and with failed crops and dead livestock, millions have left their homes to seek aid.

In Somalia alone there are an estimated 8 to 10 million people displaced and needing food aid, with thousands crossing the border with eastern ^ every day to flee from violent civil war and to seek aid and shelter at the refugee camps in Dadaab, which were built to house 90,000 refugees and currently support over 460,000. In Ethiopia, a further 4 million people need food aid, as they struggle to cope with both the starvation of its people coupled with the arrival of refugees from neighbouring countries.

Ven. Lama Dondrup Dorje continues to see the humanitarian disaster as a priority of urgent attention, and has already sent funds to the amount of £10,000 (over 16,000 US dollar), from the proceeds of this year’s Pathgate Summer Retreat and from offerings by his students around the world.

Donations in aid of the East Africa Famine Appeal can still be made to Pathgate Institute or you may make your donation directly to the aid agencies which have authorised representation in the region of the Horn of Africa. To make a donation through the Pathgate Partnership Programme, you may do so by clicking Make a Donation.