Pathgate offers friendship and food to the Homeless 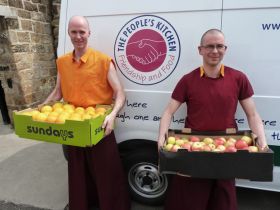 The People's Kitchen is a charity started in 1985 by Alison Kay, then in her 70s, in response to a news report about the lonely death of a homeless man on wasteland. From a humble beginning, she sought to bring ‘friendship and food’ to the homeless and lonely in Ven. Lama Dondrup Dorje’s home city of Newcastle Upon Tyne, England. The charity has many volunteers who cook and serve food six days a week, throughout the year, regularly feeding over 100 homeless at their main premises and through outreach programmes which bring soup and hot food to the streets of Newcastle upon Tyne.

Since hearing about the work of the charity, Ven. Lama Dondrup Dorje has instructed his ordained sangha responsible for puja that the large amount of fruit, snacks and bakery items that are used as food offering for the numerous puja performed on request each week at the Pathgate Dharma Centre should be donated to the People’s Kitchen in support of their feeding programme. Other donations he has since authorised for the People’s Kitchen include the supply of meats and all kinds of vegetables.