Following the success of last year’s Pathgate Institute Summer School, which offered three separate retreats tailored to the needs of students; the programme for this summer was extended to include seven separate Retreats. All the retreats took place at the Pathgate Dharma Centre – Newcastle upon Tyne, England. 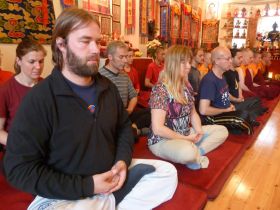 Classical Chan Ding Taijiquan Level One and Level Two Retreats then followed. The daily programme included early morning prayers, Taijiquan practice, Tara puja, Audio Dharma Teaching, in addition to receiving instruction from Ven. Lama Dondrup Dorje on the finer points of Classical Chan Ding Taijiquan. Supervised sessions on revision practice were available at the end of each teaching day so that students could recap what they had learned that day. 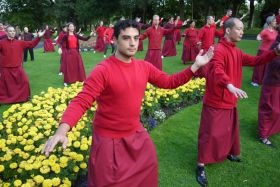 At the Classical Chan Ding Taijiquan Level One Retreat, students were introduced to the fundamentals of Classical Chan Ding Taijiquan and to the practice of how to attain the meditative state of Chan Ding – a calm-abiding mental state where one is aware of everything yet undisturbed by anything, whether their origin is of external phenomena or those of internal phenomena that arise in the mind.

The Classical Chan Ding Taijiquan Level Two Retreat was attended only by students who had previous instruction in Classical Chan Ding Taijiquan; and the importance of perfecting one’s discipline in replicating what one has been shown by one’s master was highlighted. Ven. Lama Dondrup Dorje described discipline as an act of sincerity and consistency that is composed of two vital components: the specific instruction that one has received and the specific execution one is required to implement. It is through the perfection of discipline that the mind begins to get settled and the true state of Chan Ding is attained. 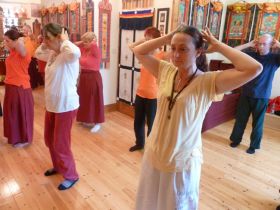 At the Classical Medical Qigong Study Level One Retreat, Ven. Lama Dondrup Dorje explained the aim of all medicine is to remove suffering, and that lasting freedom from suffering can only be attained through the practice of Buddha Dharma when the true causes of sufferings are identified and removed. In addition to daily instruction on the foundations of Medical Qigong, Ven. Lama Dondrup Dorje gave Dharma teachings and answered questions on how to bring true the benefit of Dharma in daily life.

For the Dharma Foundation Study Level One Retreat, the majority of students attending had already taken refuge with Ven. Lama Dondrup Dorje, but recognised the need to improve their existing understanding on the fundamentals of Buddhism before advancing on to the study of more in-depth practice. 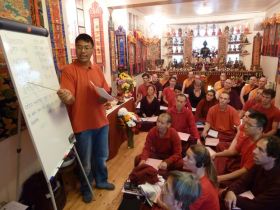 The Dharma Foundation Study Retreats for Level Two and Level Three introduced students to the teaching of the Mahayana Path, comprising extensive explanation by Ven. Lama Dondrup Dorje on the Awakening Mind of Bodhicitta, the True Nature of Compassion, Equanimity, Bodhisattva Vows, and the different stages of Samadhi Meditation.

For the students on the Dharma Foundation Study Level Two and Level Three Retreats, instruction on the Meaning of Tibetan Prayers was available each day. Students were further benefitted by the presence of a native Tibetan from the Pathgate sangha who corrected the students in their pronunciation of Tibetan in the chanting of prayers. 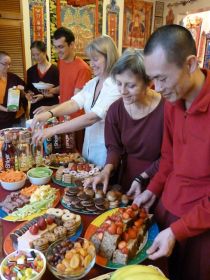 During the whole two-month retreat, students had the opportunity to attend various puja such as those for the Medicine Buddha, Amitabha Buddha, and Shakyamuni Buddha; and also tsog practices (feast offering) such as Rigdzin Dupa on Guru Rinpoche Day, Yumka on Dakini Day, and A Shower of Blessing on the day of Chokhor Duchen which commemorates the First Turn of the Wheel of Dharma by Shakyamuni Buddha at Sarnath in India.

The running of the Pathgate Summer Retreat was supported by a team of local lay and ordained sangha who worked tirelessly in the Pathgate Kitchen to provide food and refreshments for the retreatants. Special events were also arranged on the rest day between retreats, that ranged from Mediterranean-style barbeque and Japanese sushi to Tibetan delicacies such as momo (steam dumpling), tingmo (steam bun), sha balep (fried meat pasties), and thunthuk (hand-tear pasta soup). Day trips were also arranged for students to visit many local attractions such as the coastal region of Marsden Rock, the ancient city of Durham, famed for its cathedral dating back over 1000 years, and many other places of interest. 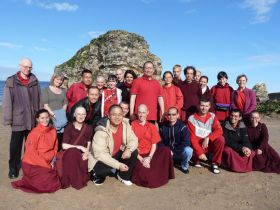 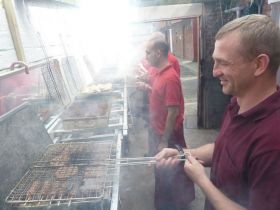