Retreat Commenced at the Kunzang Yoedseling in Bhutan 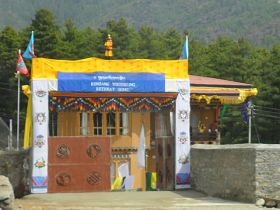 While the Pathgate Summer Retreat started in the City of Newcastle upon Tyne in the UK in July and will continue until the end of August, a separate retreat has also started for the Dharma friends of Ven. Lama Dondrup Dorje at the Kunzang Yoedseling Retreat Home in Paro, Bhutan.

Located beneath the Taktdang Palphug Monastery, which was built on the cliff-side of the upper Paro Valley where Guru Rinpoche, is known to have meditated for three months in the 8th century, the first phase of its construction commenced in November 2009. Once fully completed, it will have five separate retreat houses sited around a prayer hall in the middle within a walled enclosure. Pathgate students will have the opportunity to visit and participate in retreat at the Kunzang Yoedseling Retreat Home in the future when they visit the Buddhist Kingdom of Bhutan.