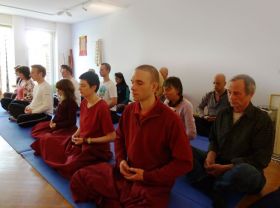 In response to long standing invitation extended by students from the Netherlands, Ven. Lama Dondrup Dorje visited the city of Dordrecht in April at the beginning of the Tulip season. Dordrecht is the ancient capital and the oldest city of Holland. While he was there, Ven. Lama Dondrup Dorje gave several teachings on Meditation, Dharma Instruction and Buddhist Medical Qigong. He also performed the ceremony of Tse Thar: the Practice of Ransom and Life Release at the request of local students.