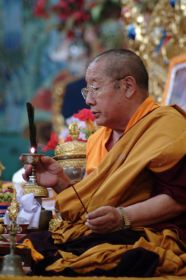 The second Anniversary Ceremony commemorating the Parinirvana of His Holiness Penor Rinpoche was held at Namdroling Monastery in India for five days which commenced on 2nd April (29th day of the 1st Tibetan Lunar Month) and continued until 6th April 2011, comprising five days of light offerings and three days of puja.

To commemorate this special anniversary, Ven. Lama Dondrup Dorje had instructed his students from around the world to join in with pujas at their respective local centres and to accumulate prayers for the Swift Rebirth of HH Penor Rinpoche.

At the main Pathgate Dharma Centres, in England and Greece, continuous light offerings were made for five days accompanied by the accumulation of prayers for the swift rebirth of HH Penor Rinpoche. 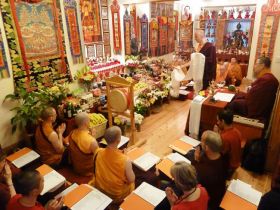 In both Centres, Puja was held for three days, with Vajrasattva practices in the morning, Shitro pujas in the afternoon, and Lama Choepa in the evening. All practices were well attended by both ordained and lay students, many of whom took days off work so as to participate in the practice throughout the five days period.

To commemorate the second anniversary of HH Penor Rinpoche’s Parinirvana, audio recordings of HH Rinpoche Rinpoche chanting the Prayer to Guru Rinpoche; Blessing of Speech, and the Lamp Offering are now available on line at the Pathgate English Language Website. To hear the chanting, please click on the Tibetan Prayer and Mantra.

May HH Penor Rinpoche be swiftly reborn and continue to spread the heart essence of the Dharma teachings throughout the hundred million worlds, for the benefit of all sentient beings.