When Ven. Lama Dondrup Dorje went to the National Palace Museum in Taipei in September to visit an exhibition of precious Tibetan Buddhist Artefacts that are usually kept in safe storage, he found himself pleasantly surprised to come face to face with a statue of Drakpa Gyaltsen (1147-1216) - one of the founding patriarchs of the Sakya Vajrayana tradition in Tibet. 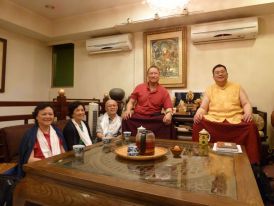 It is said in the chronicles that Drakpa Gyaltsen had taken many rebirths in the form of Indian and Tibetan mahapanditas (scholar of great accomplishment). After being the disciple of Manjushri (the Great Bodhisattva who embodies the Wisdom of all the Buddhas) for seven life times, he took birth as a lama in Tochung and then as the son of Sachen Kunga Nyingpo. 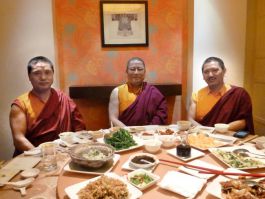 Throughout his life, he wrote many treatises and commentary such as ‘The Celestial Tree of Clear Realisation of the Groups of Tantras in General’, the Pure Commentary on ‘The Examination’, advice on the ‘Path and Result (Lamdre) Practice’, plus several commentaries on the Chakrasamvara and Hevajra Tantras, and on the sadhanas of Manjushri, Naro Khandroma, the Twenty-One Taras, Vajrakilaya, and Vairochana. He was also known for his commentary on the text ‘Parting From the Four Attachments’ which was based on the direct transmission to Sachen Kunga Nyingpo by Manjughosha (the manifestation of Manjushri) who spoke the words: “If you are attached to this life, you are not a true spiritual practitioner. "If you are attached to samsara, you do not have renunciation. If you are attached to your own self-interest, you have no bodhichitta. If there is grasping, you do not have the View.”