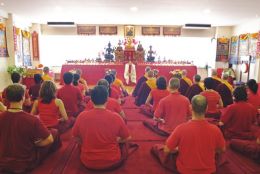 Out of Ven. Lama Dondrup Dorje’s compassion to accommodate all levels of students, the Pathgate Institute Summer Retreat this year offered three different retreats to cater for the needs of different students in accordance to their experiences. The first two retreats were held in Athens and the third one was conducted in the UK. All three retreats attracted participants from far and wide, such as Australia, Singapore, and the USA. Presence of other nationalities included those of China, Hong Kong, Japan, France, Italy, Spain, Switzerland, Slovenia, Poland, Israel, the Netherlands, New Zealand, Ireland, Greece, Cyprus and the UK. 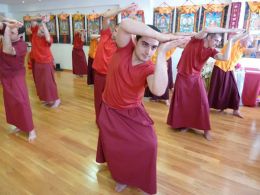 The first part of the Pathgate Summer School was a six-day Dharma Foundation Study Level One Retreat, which took place in the first week of August, at the Pathgate Dharma Centre in Athens. This retreat was designed primarily for complete novices and for those with limited understanding of Buddhism. Students were introduced to the basic principles of Buddhist practice and to a range of skillful means on how to generate a state of harmony in one’s daily life through the correct understanding and implementation of Buddhadharma. Instruction on the basic preliminary practice of Classical Qigong and Meditation was also given to help the students reduce the build-up of stagnated energy and afflictive emotion in the body. 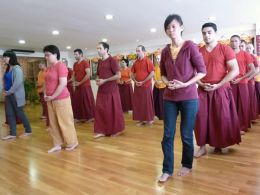 The retreat began each day with early morning prayer practice to generate the correct motivation for the day and Samadhi Walking Meditation to quieten the mind, followed by Tara Puja in the morning and Mahakala Puja in the afternoon, to facilitate the removal of any obscurations and obstacles that one may encounter in Dharma practice. Three teaching sessions spaced over morning, afternoon and evening were given daily by Ven. Lama Dondrup Dorje with the last practice concluded each day before 10.00 pm. 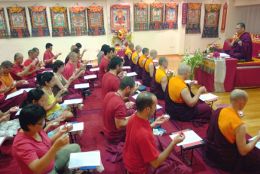 On the first morning of the six-day retreat, Ven. Lama Dondrup Dorje gave a brief commentary on a prayer from the Palyul Tradition: ‘Waking Up from the Deep Slumber of Ignorance’. This prayer points out the importance to wake up from the illusion we find ourselves in, where we grasp onto things as if they are permanent and as a result generate an untold amount of suffering for ourselves and others. It encourages us to devote ourselves to the practice of Dharma, which sees reality as it is, and to bring this understanding of the truth into our daily activities, reminding ourselves not to become lazy, as life is fragile and can end at any moment. By applying this understanding of the truth and seeing how valid it is, it gives us a fearless confidence in dealing with all the karmic obstacles we have generated for ourselves over countless lifetimes. Ven. Dondrup Dorje went on to explain that chanting prayers alone without connecting to the meaning is of no benefit unless we aspire to apply ourselves in the same manner that corresponds to the words of the prayer. 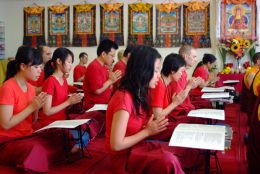 The second part of the Pathgate Summer Retreat, the Palyul Namcho Dzogchen Ngondro Level One Retreat took place in the second and third weeks of August, again at the Pathgate Dharma Centre in Athens. This retreat was open to students of Ven. Lama Dondrup Dorje who had already taken refuge with him and who were deemed as eligible to receive this specific teaching. The Namcho, or Space Treasure is one of the terma (hidden teachings) concealed in the element of space by Guru Rinpoche during his stay in Tibet and was destined to be revealed to the great Terton Migyur Dorje in the 17th Century. Known by the title: ‘Buddhahood in the Palm of Your Hand’, this terma belongs to the Inner Tantra of Ati Yoga - the Ninth Yana of the Nyingmapa tradition which is the pinnacle of all Buddhist teachings. When practised in accordance to the instruction of a qualified lama, this is the most expedient way to purifying one’s mind and attaining the realisation of one’s true nature in one lifetime. 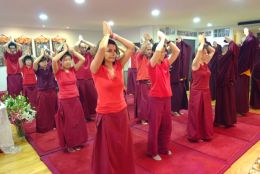 In line with the annual retreat as practised at the Namdroling Monastery in India, an extensive range of prayers, including the Seven Chapters of Supplication Prayer to Guru Padmasambhava were recited at several prayer sessions each day. The purpose for which is to create the right conditions that are conducive to the transmission and the actual practice of the teaching. Several ordained members who had attended the Ngondro retreats in Namdroling Monastery were astonished by the in-depth commentary of Ven. Lama Dondrup Dorje at the retreat. On what they had received in a one-hour transmission of Ngondro teaching at the Namdroling Monastery, nearly twenty hours of detailed explanation and commentary were given by Ven. Lama Dondrup Dorje, that simply left no stone unturned, no question unanswered. 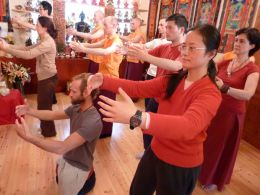 Over the course of the retreat, Ven. Lama Dondrup Dorje gave transmission on the Common Preliminary Practice of the Four Foundations and the Inner Uncommon Preliminarily Practice of Taking Refuge and Arousing Bodhicitta. Ven. Lama Dondrup Dorje repeatedly stressed to students throughout the retreats the importance of actually putting the teaching into practice and avoiding the pitfall of intellectualising what cannot be conceptualised. So, in keeping with the tradition of the Nyingma Palyul lineage, the next level of the Ngondro teaching will only be given to the students after they have shown some sign of realisation of the Four Common Preliminary Practices in addition to having completed their accumulations of 100,000 prostrations. 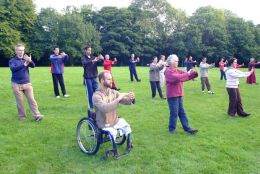 The third part of the Pathgate Summer Retreat, the Classical Internal Arts Foundation Study Level One Retreat, took place in the fourth week of August, at the Pathgate Dharma Centre in Newcastle upon Tyne, England. The retreat was once again well attended, and included one UK student who had both his legs amputated and became a wheelchair user after a train accident when he was 19 years old. 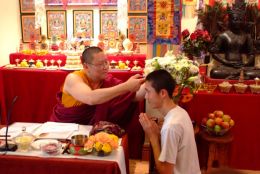 Ven. Lama Dondrup Dorje has always maintained that the Classical Internal Arts as taught by him are an extension of Dharma practice and cannot be separated from the implementation of the Buddhadharma. Over the course of the six-day retreat, students were given many opportunities to experience for themselves the true manifestation of qi energy in such a range of diversity that several of the students, who are themselves teachers of taijiquan, qigong, wushu and other therapies, came to the decision to stop their own teaching and previous practice to become formal students of Ven. Lama Dondrup Dorje. Many of the first-time students also developed a strong interest to know more about the benefit of Buddhadharma and subsequently made request to take refuge before the end of the retreat.

Ven. Lama Dondrup Dorje’s schedule for September will take him to Taiwan, Hong Kong, Singapore and the UK. For the month of October, he will be in Portugal, Italy, Greece and the UK. For details, please click Teaching Schedule.