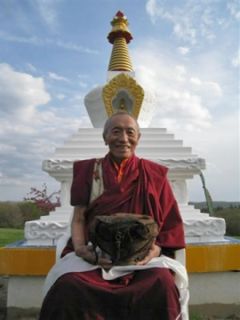 One of Nyingma's most respected masters, Khenchen Palden Sherab Rinpoche, passed into Parinirvana at 8:07 PM on June 19, 2010, the auspicious day of Medicine Buddha, at his home, Arya Palo Ling in NY, USA, in the presence of his beloved brother, Venerable Khenpo Tsewang Dongyal Rinpoche.

Khenchen Palden Sherab Rinpoche was one of the most senior and most learned scholars among the Nyingma Masters. In 1967, His Holiness Kyabje Dudjom Rinpoche appointed Khen Rinpoche to head the department of Nyingma Studies at the Central Institute of Higher Tibetan Studies in Varanasi, India. Khen Rinpoche was the first so honoured to hold this position. Khen Rinpoche taught and served at the Institute for more than 18 years with great sincerity, success, and dedication. He later went to the USA and with his brother, Khenpo Tsewang Dongyal Rinpoche, established the retreat centre Padma Samye Ling at Upstate New York.

Khen Rinpoche's great knowledge of Buddhadharma, and specifically with regard to the Ngagyur Nyingma tradition was greatly appreciated by everyone within the Buddhist community. Khen Rinpoche was not only a great scholar but also a profoundly accomplished Dzogchen meditation master. In his life, he benefited numerous beings throughout the world, as evidenced by the many dharma centres he established and the following of many devoted disciples worldwide. In his memory and for the tireless compassion with which he taught and benefited us all, Ven. Lama Dondrup Dorje has instructed Pathgate students to perform the Vajrasattva practice as a way to express our appreciation and gratitude to the compassionate activities of Khenchen Palden Sherab Rinpoche.