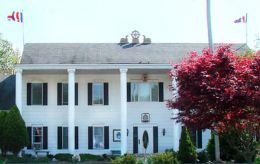 Kunzang Odsal Palyul Changchub Choling (KPC) is a Vajrayana Buddhist organization founded by Jetsunma Akhon Norbu Lhamo to uphold the Palyul Lineage of the Nyingma tradition in the west. The KPC Temple at Poolesville, Maryland, USA, is located in the rural Montgomery County, a pleasant half-hour drive from Washington, D.C. It has a Prayer Room which houses the main Altar, a Dharma Room which serves as the Teaching Hall, and a Crystal Gallery with an extensive collection of crystals. Located in the temple grounds and in the 65-acre Peace Park opposite the temple, are thirty magnificent Stupas which have been blessed by the late Holiness Penor Rinpoche. 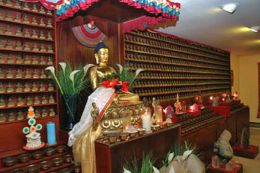 Having been established for over twenty-five years, the mortgage on the temple property had already been paid off, but the Peace Park across the road from the KPC Temple continued to carry a mortgage that was financed by a mortgage-backed line of credit, with the temple property used as collateral. Due to the current economic down turn, KPC have been falling quite a bit behind in payments to the bank. Unexpectedly, the credit note was called in by the bank on the 24th April and KPC was given just 5 days to raise the $250,000 US dollars needed to prevent its property and assets being seized by the bank. On the 27th April, Ani Tenzin Wangmo, a KPC nun in Australia emailed Ven. Lama Dondrup Dorje and requested his help in this matter. Meanwhile, a fund-raising telethon was organised by the KPC on the same evening and the pledges of donation they received that night reached $108,000 US dollars, but it was still quite far from the target they were aiming for. If the full amount of $250,000 US dollars could not be raised and presented to the bank by the morning of the 30th April, the KPC Temple would be lost and therefore the compassionate activity of His Holiness Penor Rinpoche in helping Jetsuma establishing the KPC Temple would also be lost. 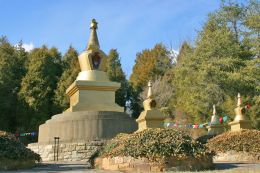 Ven. Lama Dondrup Dorje, who has been entrusted by his Root Guru the late Holiness Penor Rinpoche with the responsibility of taking charge of the largest Palyul Ordained Sangha in Europe, has always maintained his only mission in life is to promote and preserve the Dharma activities of his Root Guru Penor Rinpoche. On hearing the plight of the KPC and recognising the imminent threat that the KPC Temple, which had been blessed by numerous visits of the late Holiness Penor Rinpoche, was on the verge of being lost to the bank, Ven. Lama Dondrup Dorje immediately took steps to offer financial help to the KPC by diverting money to the KPC from the Pathgate Centre Fund, which was due to be used in paying off the mortgage for the main Pathgate Dharma Centre, in Newcastle upon Tyne, England. Wishing to encourage the many supporters of KPC around the world to play a bigger part in the fund raising effort, Ven. Lama Dondrup Dorje offered to match the amount pledged by donors during the final night of fund-raising telethon on the 28th April. Being aware that this effort may still not be sufficient, Ven. Lama Dondrup Dorje also offered to top up the difference in the short fall of donation that was needed to reach the total amount of $250,000 US dollars, to ensure the future of the KPC Temple is secured.

When asked why he has no hesitation in diverting the money meant for the mortgage repayment of his own Dharma Centre to support KPC at such short notice, Ven. Lama Dondrup Dorje replied simply that he is only carrying out his duty to preserve the Dharma Activities of His Holiness Penor Rinpoche for he regarded the establishing of KPC as the extension of his Root Guru Penor Rinpoche’s Enlightened Activities and as such, it deserves the right to be preserved for the benefit of all sentient beings.