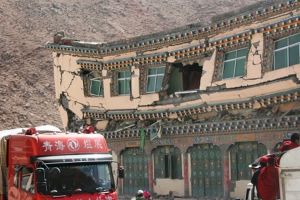 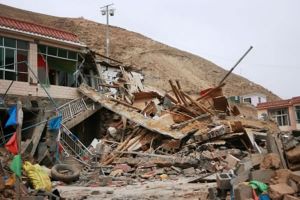 On April 14th at 7:49am, an earthquake measuring 7.1 struck the Yushu Tibet Autonomous Prefecture located in Qinghai, the traditional Tibetan province of Kham; the birth place of the late Holiness Penor Rinpoche. The population of the area is 98% Tibetan. Official figures report 2,220 dead and over 12,000 injured with many people still missing.

Worst hit was the city of Kye Ku Do (Jiegu) where many buildings were heavily damaged. To the north and west of the city, 90% of the poorly built mud homes lived in by most Tibetans were destroyed. Makeshift camps were set up in open clearings, where many people escaped to with only the clothes on their backs, many in night wear and without shoes. Residents were unable to re-enter their homes more than a week later due to the fear of safety. The weather has added to the difficulties of the homeless survivors with strong winds, snow fall and overnight temperatures dropping well below zero. 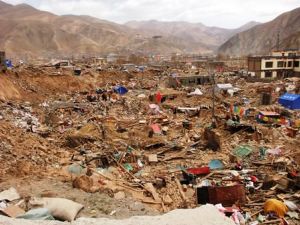 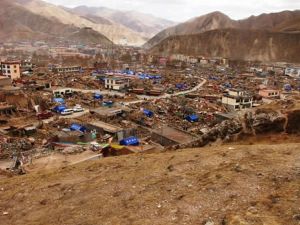 Thousands of monks from both local monasteries and monasteries at neighbouring provinces arrived in their masses to assist in the relief effort of recovering survivors and the dead from the wreckage. Due to the large number of casualties and the unsanitary conditions, it was decided that traditional burial practices would not be possible and a mass cremation according to Buddhist custom was held instead. 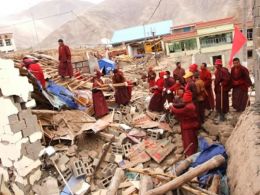 One week after the earthquake, China held a day of national mourning for victims of the disaster. Newspapers were printed only in black and white, websites drained their pages of colour, Chinese flags flew at half mast and three minutes of silence was held across the nation.

The Palyul mother monastery in Tibet was close to the epicentre and though the earthquake was felt there, there was no damage to the buildings and no casualties. Everyone at Pathgate Institute offers our heart-felt prayers to those caught up in this tragedy.