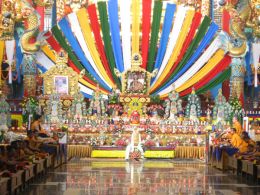 To commemorate the First Anniversary of His Holiness Penor Rinpoche’s Parinirvana, a Grand Ceremony comprising five days of puja was held at the Namdroling Monastery in India from 14th to 18th March 2010 (29th day of the 1st Tibetan Lunar Month to the 3rd day of the 2nd Tibetan Lunar Month, of the Year of the Iron Tiger 2137). Many Palyul students from around the world made the journey to India to join the ordained sangha at Namdroling Monastery during the five-day Grand Puja.

Elsewhere around the world, every Palyul Centre was hosting special practices to cater for the need of the local sangha wishing to participate during this special occasion. Likewise the Palyul Centres and Study Groups under the care of Venerable Lama Dondrup Dorje in Europe and Australia were all involved in full-day practices during the five days period of the Grand Puja. At the main seat of Palyul Nyingma Buddhist Association (UK) based at Pathgate Dharma Centre in Newcastle upon Tyne, England, the first practice of each day commenced at 6.00 am followed by Dorje Sempa (Vajrasattva purification) in the mid-morning, Shitro (100 Peaceful and Wrathful Deities) in the afternoon and Lama Choepa Puja in the evening. All the Centres reported good turn out of local sangha participating in this special anniversary.

To see how the Grand Puja for the First Anniversary of His Holiness Penor Rinpoche’s Parinirvana was commemorated in Namdroling Monastery, please visit the Pathgate Gallery.