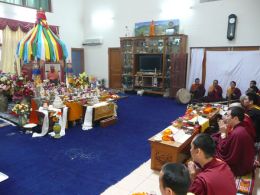 New to the Dharma Theatre is a 39-minute film, Tsa Wai Lama Chen, which covered the events during the Mahaparinirvana Puja Ceremonies for H.H. Penor Rinpoche at Namdroling Monastery last year. Produced by Lopon Rapjee Wangchuk, a personal attendant of the late Holiness Penor Rinpoche, it featured footage filmed inside the house of His Holiness and the proceeding of the 49-day puja. It also documented the unusual occurrence of many extraordinary phenomena during the 49-day period such as the sudden change in the facial features of the Guru Rinpoche statue in the Zangdok Palri Temple from that which was wrathful to that of deep sorrow two days after His Holiness released his body from the meditative state of Thugdam; numerous appearances of rainbows around the monastery at various times and many other astonishing sights.