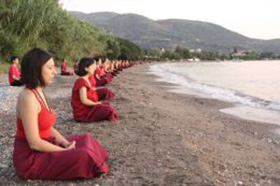 The retreat began each morning before sunrise with group practice of prostrations, followed on most mornings by qigong and meditation on the beach as the sun rose from beyond the eastern horizon. A typical day at retreat was filled with prayer practices, pujas, Dharma teaching, instruction on Classical Qigong, and continued on until late in the evening. 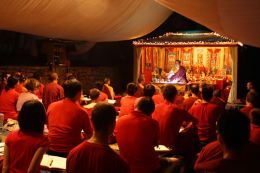 Venerable Lama Dondrup Dorje compassionately gave teaching on a wide range of Dharma topics and practices, in addition to leading students in prayer, giving daily instruction on Classical Qigong and answering questions from students throughout the day and into the night. Teachings began with introductions to Buddhism, to the meaning and purpose of prayers, to the need for devotion and in how to apply the Dharma teachings in our daily lives. Teachings were often explained with stories from the time of Lord Buddha and with personal anecdotes from Ven. Lama Dondrup Dorje’s wealth of time spent in the devoted attendance to the late Holiness Penor Rinpoche. 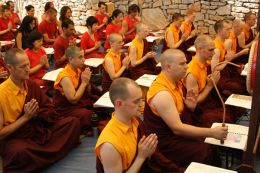 Retreatants were treated to an extensive explanation on a range of Dharma subjects from the course work of the Dharma Foundation Studies that covers the Buddhist understanding from the perspective of: cause and effect, consciousness of mind-stream, Buddha Nature, karmic imprint and karmic condition, the three realms of existence, and the formation of the universe. Other preliminary subjects introduced the students to the goal of Dharma practice, the paths it encompasses, the methods it utilises, and the essential pointers on the journey. Students also received teachings that covered the importance of renunciation, introduction to the Bodhisattva path and explanation of the paths of the nine yanas, four empowerments, guru yoga, the ten bhumi of the Bodhisattva ground, the differences between the four types of refuge, which are the outer refuge, the inner refuge, the secret refuge and the ultimate refuge and commentary of the Seven Line Prayer to Guru Rinpoche from the text Pedma Karpo by Jamgon Mipham Rinpoche. 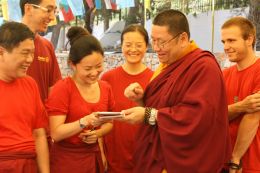 All these teachings were to prepare the students to receive the main transmission of the retreat, Jamgon Mipham Rinpoche's Classic text 'Khepai Tsulla Jugpai Go' - Entrance to the Ways of the Wise, from which Ven. Lama Dondrup Dorje focussed retreatants attention on a systematic examination of The Five Aggregates. Jamgon Mipham Rinpoche (1846-1912), also known as 'Mipham the Great' was a highly accomplished master in practice, learning, composition and teaching of the Nyingma Tradition of Tibetan Buddhism. 'Khepai Tsulla Jugpai Go' is a condensed presentation of the Tripitaka (Three Baskets) and its accompanying commentaries, which embodies the essence of Prajnaparamita (the Great Perfection of Wisdom), Madhyamika (Nagarjuna's Middle Way), and Abidharma (Metaphysics). This text is one of the major subjects that is taught at the Ngagyur Nyingma University at the Namdroling Monastery. 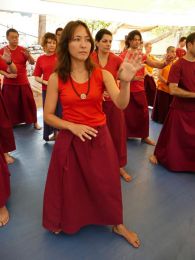 For those who enjoy qigong practices, instruction on both the common and uncommon level of the Classical Qigong was given each afternoon during the retreat. These teachings covered an extensive range of Classical Qigong practices with individual energy initiation given by Ven. Lama Dondrup Dorje to those students qualified to receive in accordance to the lineage of the Secret Refuge and the Chan tradition.

To facilitate the ease of learning for students from different countries who had difficulties in understanding English, simultaneous translation of the teaching was available in Cantonese, Mandarin, Vietnamese, French, Italian, Greek, Spanish, Portuguese, and German.

The next Pathgate Summer Retreat is scheduled to take place in August 2010. For details of other upcoming teachings by Lama Dondrup Dorje, please visit Teaching Schedule.