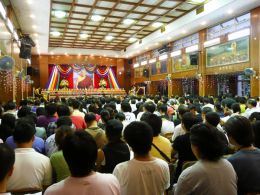 On the Saturday evening of 27th June 2009, a large congregation of Palyul sangha and Buddhist devotees in Hong Kong gathered together at the Assembly Hall of the Fo Jiao Huang Feng Xiang Primary School in Hong Kong to attend a special Lama Choepa Puja (prayer ceremony) in honour of the Mahaparinirvana of the late Holiness Pema Norbu Rinpoche. The event was organised by the Penor Rinpoche Charity Foundation in Hong Kong and was well supported by the presence of many Tulkus and Lamas of the Palyul lineage, which included HE Gyangkhang Rinpoche and HE Mugsang Kunchen Rinpoche from India, Lama Nyima Tsering from Taiwan and Lama Dondrup Dorje from the UK. 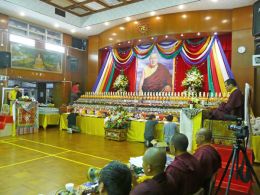 After the completion of the Lama Choepa Puja, HE Gyangkhang Rinpoche, the Chairman of both the Namdroling Monastery Management Committee and the Penor Rinpoche Charity Foundation reminded the congregation with a talk based on the teachings of the late Holiness Pema Norbu Rinpoche. He reassured the Hong Kong sangha that the wishes of the late Holiness Penor Rinpoche to relocate the current Hong Kong Palyul Centre to larger premises will be honoured and it is the intention of the trustees of the Penor Rinpoche Charity Foundation (HK) to finalise the securing of new premises before the end of the year. He also took the opportunity to announce that Lama Pema Tsewang Sherpa has been appointed to take charge of the Hong Kong Palyul Centre. 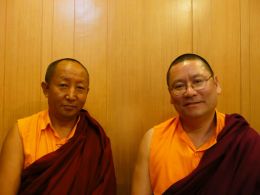 A long-time friend of Lama Dondrup Dorje, Lama Pema Tsewang Sherpa had spent over five years as a resident lama at the Hong Kong Palyul Dharma Centre from the late 90s before returning to Namdroling Monastery in India to complete a three year-three month retreat at the Samten Oseling Retreat Centre. His appointment was a popular choice since he is already well known to the Hong Kong Palyul sangha.

HE Mugsang Rinpoche also gave a brief talk to the Hong Kong sangha reminding them of the importance of cultivating the correct attitude in their Dharma practice and that the practice they undertake should not be separate from the teaching they received from the late Holiness Penor Rinpoche. At the conclusion of his speech, Kudung Rilbu (relic pills) and small pieces of the sacred robe of the late Holiness Penor Rinpoche were distributed to all who were present.

A large selection of photos, which capture the proceedings of the evening, can be viewed at the website of the Penor Rinpoche Charity Foundation (HK): www.palyulhk.org