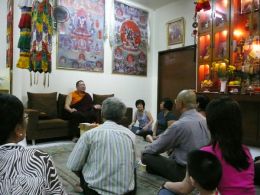 Over the course of several years, many students from Malaysia had travelled far and wide outside Malaysia just so as to attend teaching given by Ven. Dondrup Dorje. Touched by their devotion, Ven. Dondrup Dorje went to Malaysia in early July to give a series of teachings to the Dharma devotees there. His first stop straight from the airport was to pay a visit to the Tara House in Kajang. Tara House is a Vajrayana Centre founded by the students of the late Tulku Urygen Rinpoche. Ven. Dondrup Dorje’s presence at the Tara House was much appreciated by the sangha there. After spending two hours giving private audience and answering questions forwarded by the sangha members of the Tara House, Ven. Lama Dondrup Dorje travelled on to Selangor where he had a late dinner with his students there before settling in for the night. 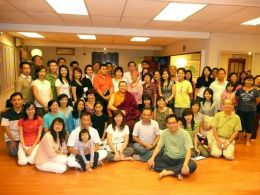 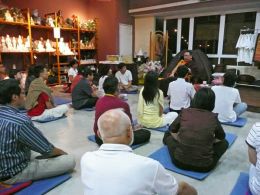 On his last evening in Malaysia, Ven. Dondrup Dorje was invited to give a talk on How to be a Buddhist in a Modern World at Sukhi Hotu, a well known Dharma bookshop and publisher in Petaling Jaya. At the end of his talk, the host gave a speech of thanks by describing the teaching as not merely profound and enlightening but that the range of subjects it covered were so extensive and vast that it requires one to have a comprehensive understanding of every single Dharma book in his store.