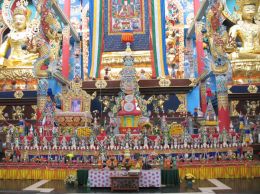 The month of June has been a busy period at Namdroling Monastery in India. Two weeks after the completion of the Kama Drubcho (Great Accomplishment Ceremony that confers the Supreme and Common Siddhis of the Kama Teachings) which took place from the 1st to the 7th of June (9th to the 15th day of the 4th Tibetan month), and Saga Dawa Duchen which celebrates the three miraculous events of the Birth, the Enlightenment and the Parinirvana of Shakyamuni Buddha on the 7th of June (15th day of the 4th Tibetan month), came the 97th Anniversary of the great Dzogchen Master of the Nyingma tradition, Jamgon Mipham Rinpoche (1846-1912). 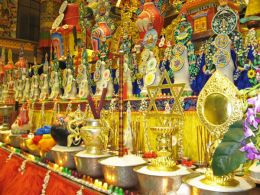 To commemorate this special annual occasion, an all-day ceremony based upon Jampal Gyu Lug (the traditional Manjushri Tantra practice) was held on the 21st of June (29th day of the Fourth Tibetan Month). Throughout the day, discourses on various aspects of Buddhadharma were presented by the students of the Ngagyur Nyingma University. In the evening, the ceremony resumed with recitation of the Manjusrinamasamgiti (Names of Manjushri) and the Chekyi Gyaltsen Legpar Tsug (the Perfect Hoisting of the Dharma Banner) before more presentations of dharma discourses were presented. This was followed by bout after bout of Tsoglang (formal debates between two monks before an audience of religious leaders, scholars and fellow members of the sangha). The celebration of the Anniversary was eventually concluded at around 11.00pm after the recitation of Tsig-Zang (chanting of the Buddha’s Four Truths for the Noble Beings), and Zangchod (prayer of dedication).

Jamgon Mipham Rinpoche was an extraordinary and most influential figure in the history of the Nyingma lineage of the Tibetan Buddhism. He was born in the region of Derge in eastern Tibet in 1846. From an early age, he received extensive lineage transmission from many great masters that include Patrul Rinpoche, Jamyang Khyentse Wangpo Rinpoche, and Jamgon Kongtrul Rinpoche. By the age of sixteen, he had already completed an eighteen month intensive retreat on the practice of Manjushri who is the embodiment of the Wisdom of all the Buddhas. Jamgon Mipham Rinpoche was known for his practical approach in implementing the teaching of Buddhadharma. He also wrote many classic texts which range from subjects as diverse as medicine, poetry, cosmology, divination and alchemy to the profound teachings of the Dzogpa Chenpo (Great Perfection). One of his most famous texts is the Khepai Tsulla Jugpai Go (Entrance to the Ways of the Wise) - a condensed presentation of the Tripitaka (Three Baskets), which embodies the essence of Prajnaparamita (the Great Perfection of Wisdom), Madhyamika (Nagarjuna's Middle Way), and Abidharma (Metaphysics). For the benefits of Dharma devotees, Ven. Lama Dondrup Dorje has decided to teach this classic text at this year’s Pathgate Summer Retreat in Greece.