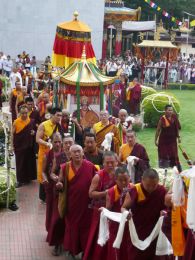 On 15th day of the second Tibetan month (9th April 2009), after the late Holiness Penor Rinpoche released his body from the meditative state of Thugdam, the Kudung (holy body) of the late Holiness was moved from his private residence to the Zangdok Pelri Temple where daily prayers of Gongdzog andLama Choepa were recited by a congregation of Tulkus, Khenpos and Lamas.

On the morning of 28th day of the third Tibetan month (22nd May 2009), the Kudung of the late Holiness Penor Rinpochewas moved to the Golden Temple where it was placed on the throne before the commencing of the ceremony for the final day of the 49-day Puja. 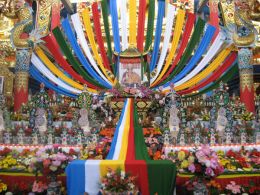 The ceremony was attended by over 4000 members of the monastic sangha and a large gathering of foreign students in addition to countless devotees from the Tibetan settlements of Bylakuppe. Making mandala offering on behalf of the Pathgate students to the late Holiness during the ceremony aside, Ven. Lama Dondrup Dorje, as a trusted disciple of the late Holiness Penor Rinpoche, was on hand in the afternoon to oversee the orderly proceeding of devotees in their thousands making offering of khata (white scarf) to the Kudung of the late Holiness. 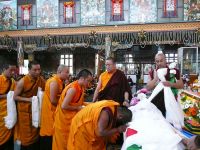 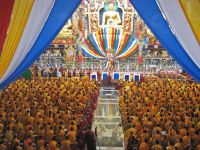 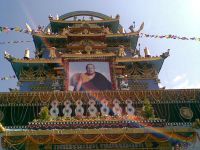