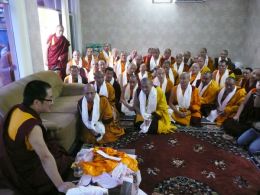 Located about one hundred metres to the north of theGolden Temple within the ground of Namdroling Monastery in South India is the Samten Oseling Retreat Centre which is used exclusively as a facility for those who wish to undergo a three year-three month retreat of Buddhist practice. On the morning of the 26th April 2009 at 7.30 am, 37 retreatants left the Samten Oseling Retreat Centre for the first time in three years after having completed their three year-three month retreat practice within the closed-door facilities. Accompanied by lamas and monks holding incense offering and playing religious instruments, they walked in a single-file procession to the private office of the Namdroling Monastery Management Committee, where offering of the siddhi (accomplishment nectar) and khata were made toHH Karma Kuchen Rinpoche, the 12th Throne-holder of the Palyul Lineage and to HE Mugsang Kuchen Rinpoche. HH Karma Kuchen Rinpoche in turn gave them precious heart-essence advice, which was greatly appreciated by all who were present. 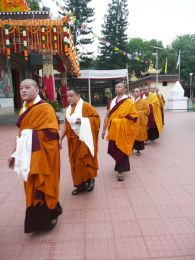 Once the audience was over, the retreatants went to the Tara Temple where they recited prayers to mark the auspicious occasion. The Ge Koe (Discipline Master) congratulated the successful practitioners with khatas and monetary offering on behalf of the monastery. Concluding prayer of dedication was recited before the group returned to the retreat centre. At 9 am, all the retreatants went to the Zangdok Palri Temple to pay their respects to the Kudung (Holy Body) of HH Penor Rinpoche. These 37 retreatants are the eighth batch of retreatants who had successfully completed their three year-three months retreat at the Samten Oseling Retreat Centre, which has been in operation since 1985. A new batch of retreatants have since received the necessary initiation from Khenchen Pema Sherab and entered the retreat centre to commence their three year-three month retreat. One of the new retreatants is Lama Sherap Gyatso who served under Ven. Lama Dondrup Dorje for a period as a resident lama at the Palyul Tibetan Buddhist Meditation Centre in Newcastle upon Tyne, England. Lama Sherap Gyatso is an expert in torma making. To witness his skill in action, you may visit the page of Pathgate Theatre and click on the film 'The Making Of Torma'.