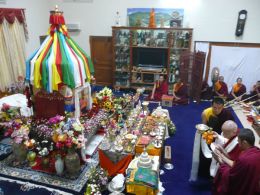 On the morning of 3rd April at 8.00 am, in the presence of Tulku Gyangkhang, Tulku Mugsang, Khenchen Pema Sherab, Khenchen Namdrol and Khenchen Tsewang Gyatso, it was confirmed that His Holinesshad released his body after having entered the meditative state of Thugdam for one week. For the next six consecutive days, Ceremony of Lama Choepa (Offering to the Lama) sponsored by Lama Dondrup Dorje, was conducted each morning by Yangthank Rinpoche, HE Gyangkhang Rinpoche, HE Mugsang Rinpoche and a small group of selected Lamas before the Kudung (Holy Body) of His Holiness Penor Rinpoche inside his residence. 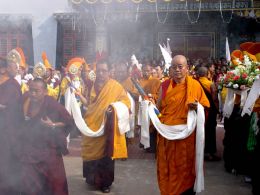 On the morning of 15th day of the 2nd Tibetan Month of the Royal Earth Ox Year 2136 (9th April 2009); the Kudung of His Holiness Drubwang Pema Norbu was moved from his residence to the Zangdok Palri Temple by a traditional palanquin which was placed on a specially prepared vehicle for the journey. The palanquin was taken around the grounds of theGolden Temple and the Ogyen Dongag Shedrup Osel Dhargyeling amidst a thick column of devotees who lined up along the way. The entire journey was accompanied by the senior Tulkus, Khenpos, Lamas and Lopons of the Namdroling Monastery with khatas (white scarves), incense and flowers in their hands. 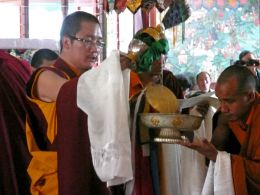 Having arrived at the Zangdok Palri Temple, the precious Kudung was seated upon a throne on the ground floor of the temple before rituals of Jongwa (Purification of the Elements) and Thrusol (Ablution Ceremony) were performed. Introduction of theMahaparinirvana Ceremony was given by Khenchen Namdrol and Khenchen Tsewang Gyatso while tea and dresil (sweet rice) were served to the guests inside the temple. This was followed by the Lama Choepa ceremony (Offering to the Lama) and concluded with the chanting of auspicious prayers. All the special guests as well as tulkus, khenpos, lamas and lopons were allowed to pay respects and receive blessing from the Kudung of HH Penor Rinpoche. 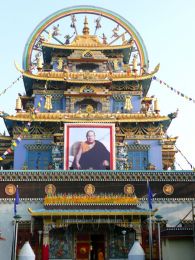 Afterwards, lunch was served at the prayer hall of the Nyingma Institute to all the guests, while the general public was allowed access to pay respects and receive blessing from His Holiness' Kudung.

The Kudung of His Holiness Penor Rinpoche will eventually be moved to the first floor of the Zandok Palri Temple and will remain there for at least one year. Meanwhile, daily pujas continue with Shitro (the Hundred Deities practice), Dorje Sempa (Vajrasattva) and Lama Choepa (Offering to the Guru)during the course of the day. The 49 days puja will conclude on 22nd May 2009.

If you wish to pay respects and receive blessing from the Kudung of His Holiness Penor Rinpoche, you may emailThis email address is being protected from spambots. You need JavaScript enabled to view it. for details.