His Holiness Drubwang Pema Norbu Rinpoche, the 11th Throneholder of the Palyul Lineage of the Nyingma School of Tibetan Buddhism entered the stage of Thugdam, the final stage of meditation, as of 8:20 pm on Friday, 27th March 2009 (the first day of the second Tibetan month), at the Namdroling Monastery in Bylakuppe, South India.

Earlier that day at noon, His Holiness received offerings from many of the highest Nyingma Tulkus, Khenpos, and Lamas who had assembled to pay homage to him. His Holiness left Columbia Asia Hospital in Bangalore at 3:30 pm with the help of the Bhutanese Government who provided an Indian police escort. He reached Palyul Namdroling at 6:40 pm and remained on his bed at the residence. Tulkus, Khenpos and Lamas did aspiration prayers together with His Holiness. At 8:20 pm Indian time, His Holiness, without showing any sign of pain, looked briefly around, smiled, and entered the meditative state of Thugdam. Prayers continued for 5 minutes and then everyone remained in silence for the next two hours. 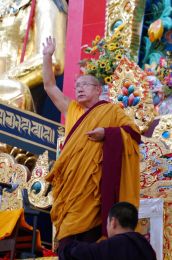 His Holiness Penor Rinpoche remained in thugdam for six and a half days. On the morning of Friday 3rd April at 8.00 am Indian time,he released his body from meditation and entered Parinirvanain his own private quarters at the Namdroling Monastery. Lama Dondrup Dorje was one of a handful of Lamas, Tulkus and Khenpos who were able to offer homage and khata to His Holiness' body inside his private quarters. His Holiness looked totally at peace after remaining in Thugdam for nearly one week. His face was one of radiance and his body produced the scent of sandalwood which permeated the whole room and its surroundings. The fragrance was so tangible in the air that it could be sensed even at the garden outside. The sweet fragrance of sandalwood is the sign that symbolises the highest level of pure morality that His Holiness has perfected. Immediately afterwards on the same morning, His Holiness's body was prepared for preservation so that the devotees can pay their respects to His Holiness and receive blessings from his holy body.

The board and faculty of the Namdroling Monastery has announced that the Blessing Ceremony will begin on 9th April (the full moon day of the 2nd Tibetan month) with rituals and a ceremonial procession to carry Kyabje Penor Rinpoche's body into the Zangdok Palri Temple at Namdroling Monastery. It is expected that His Holiness' body will remain in the temple for a month. All Palyul students and Dharma friends are welcome to attend this ceremony or to come afterwards during the 49-day period to receive His Holiness Penor Rinpoche's blessings. 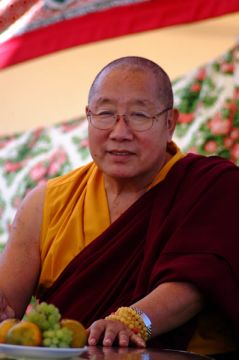 Meanwhile, all students are advised to make light offering for His Holiness. They should also do the Vajrasattvapractice, and recite the Narak Kong Shak, The King of Aspirational Prayers and Prayers for the deceased. To listen to Narak Kong Shak and The King of Aspirational Prayers, and to download the text, please visit Tibetan Prayer and Mantra.

His Holiness Penor Rinpoche was born in the year of the Water Monkey (1932) in the Powo region in southeastern Tibet. In 1959, His Holiness Pema Norbu Rinpoche decided to relocate to India for the sake of preserving Buddha Doctrine for the benefit of all sentient beings. Accompanied by a small group of monks, he settled in the region of Bylakuppe in Mysore, South India.

Apart from propagating Buddha Doctrine in India and in Tibet, His Holiness Pema Norbu Rinpoche has established many Dharma Centres around the world, which he visited regularly to promote Dharma activity for the benefit of all sentient beings. His Holiness is universally revered for his loving kindness and compassion, pure upholding of the Vinaya, the code of pure conduct and ceaseless dedication to the welfare of all beings. He will live forever in our hearts

To read a brief biography of His Holiness Pema Norbu Rinpoche, visit the Palyul Lineage Gallery; and to see the film ‘The Compassionate World of H.H. Penor Rinpoche’, visit the Dharma Theatre.