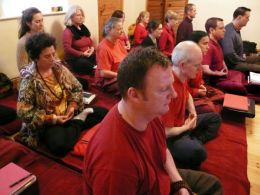 Venerable Lama Dondrup Dorje has given to his students a massive amount of Dharma teachings over the duration of many years. Just so the students may have the opportunity to assimilate the teaching they received, Venerable Lama Dondrup Dorje has compassionately arranged a series of Pathgate Study Group Retreats for the students to be held regularly at the Palyul Tibetan Buddhist Meditation Centre, Newcastle upon Tyne, England.

The first two-day retreat was held in February 2009 and followed by another two-day retreat in March. Both retreats were attended by ordained students and lay students from the UK and overseas.

The objective of the Pathgate Study Group Retreats is to offer an opportunity for the students to digest the vast wealth of teachings given to them by Venerable Lama Dondrup Dorje over the past years, and in so doing become worthy vessels to receive further instruction on the more profound level of Buddha Dharma.

The retreats were supervised by senior facilitators of the Pathgate Institute, and were conducted in accordance to the guidance of Lord Buddha on Dharma practice by utilising the Three Wisdom Tools of Listening Repeatedly, Contemplating Repeatedly and Meditating Repeatedly.

The main focus of the retreats centred upon a series of Audio Teaching by Venerable Lama Dondrup Dorje that have been specially selected from the Dharma Foundation Course's material. Each teaching session was followed by guided practice of contemplation and meditation on the key points from the teaching. Students at the retreat also had the opportunity to participate in Prayer Practices, Classical Meridian Qigong, and Meditative Taijiquan. 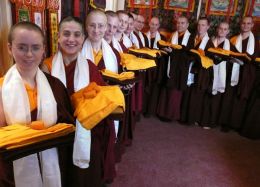 At the very first Pathgate Study Group Retreat held in February, the students were blessed with a visit by Venerable Lama Dondrup Dorje, who distributed gifts of new robes to the ordained members of the sangha at the retreat and inspired all the students with an impromptu teaching on the importance of protecting one’s Samaya, and of avoiding the habitual pitfall of mistakenly believing that having listened to Dharma teaching is as the same as actually implementing the Dharma teaching into one’s daily life. He went on to caution the students that to focus on one’s intellect alone without the support of actual practice will only increase one’s conceptual obscuration and give rise to further causes of suffering and conflict for oneself and others.

Following the success of the first two Pathgate Study Group Retreats, a further series of retreats will be held this year at the Palyul Tibetan Buddhist Meditation Centre, Newcastle upon Tyne, England. The next Pathgate Study Group Retreat will be a 4-day retreat from the 10th – 13th April, over the Easter weekend. The main theme will be on the subject of Generating Bodhicitta and The Path of the Bodhisattva.

The course material of the retreat is suitable for anyone who wishes to develop better understanding of Buddhism whether from the perspective of a complete novice or from that of a more experienced practitioner. All participants of the retreat are by advanced registration only. There are no formal charges for the retreat. Students may make offering of their own in accordance to the custom of receiving Dharma teaching. To secure a place at the retreat, please send email to This email address is being protected from spambots. You need JavaScript enabled to view it..