Chiefly due to generous support from the students and friends of Pathgate Institute over the past year, the Pathgate Partnership Programme has been able to maintain the sponsorship of a range of Dharma projects worldwide. Here is a brief summary of some of the projects. 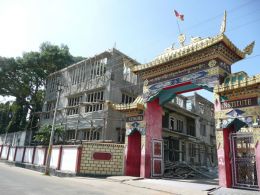 Following the successful completion and furnishing of the brand new 3-storey building for the Ngagyur Nyingma Institute at Namdroling Monastery in India, the construction of a second 3-storey building was commenced in mid 2008 and is scheduled to be completed by the first half of 2009. The construction of the second new building had already reached the third floor by mid-December 2008.

The first building, opened for use in March 2008 by Khenpo Pema Sherab, offers seven classrooms and sufficient accommodation for over one hundred students from the Institute. The second building will provide a new home for the Institute Office, Rigzod Editorial Committee Office, Reception Office, Staff Meeting Room, Computer Room, Book Shop, Student Canteen, and General Store. There will also be provision for staff accommodation and garages. 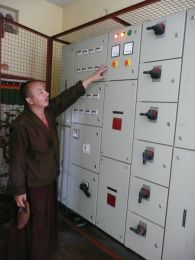 Proceeding at the same time as the construction was the introduction into use of a brand new electrical power supply system, which enables the Shedra to move from the commercial tariff charges of power usage to the domestic tariff charges, which reduce the cost of electricity charges to about one-fifth of what the Institute used to pay. 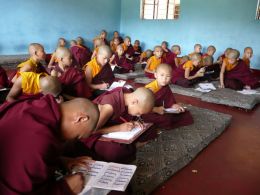 Due to the arrival of several hundred young monks each year to join the monastic sangha at Namdroling Monastery, spare beds are always in short supply. For the year 2008, 390 new beds were offered by Lama Dondrup Dorje to the Ngagyur Nyingma Junior School, which has at present 1600 young monks undergoing an eight-year junior school academic programme. In response to a request made by Khenpo Tsering Namgyal, the School Principal, Lama Dondrup Dorje has agreed to take care of the full cost of the extension project to increase the size of the Staff Meeting Room to cater for the increasing number of teachers at the school. 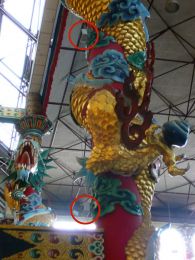 The Golden Temple at the Namdroling Monastery has, for several years, been plagued by the pest of bird droppings from pigeons, which adopted the interior of the temple as their home. The condition of the bird pest got to such a serious state that a plan to install bird nets in the temple to protect the statues from further fouling from the pigeons had even been considered. In the summer of 2007, Lama Dondrup Dorje presented a plan of alternative action to His Holiness Penor Rinpoche on how to eliminate this problem. 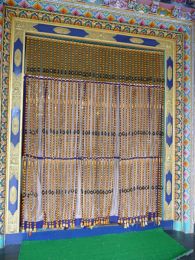 Having had discussion with experts on pest control in the UK, Lama Dondrup Dorje put forward the suggestion of installing ultrasonic devices, which emit ultrasonic sound that is inaudible to human ears but causes irritation to the birds with a sound much like that of a car alarm. Upon permission of His Holiness, Lama Dondrup Dorje made trips to the monastery to supervise the installation of twenty-four individual units of ultrasonic speakers and control boxes. Each speaker offers an effective area of coverage up to 1200 sq ft up and an effective distance of 50 ft. Specially manufactured hanging curtains of large wooden beads, stitched onto the backing of fabric, were positioned at the entrance to the temple to stop birds from entering freely while new mesh-guards were installed at all the windows. After a trial period of one year, we are pleased to report that the interior of the Golden Temple is now totally free from the problems of bird pest. 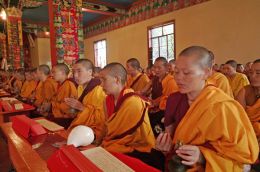 To facilitate e-mail communication and broadband Internet access, wireless networks were set up at both Namdroling Monastery, and the Tsogyal Shedrup Dargyeling Nunnery by the installation of wireless emitter that offers full coverage of broadband Internet access within the grounds of the monastery. The Tsogyal Shedrup Dargyeling Nunnery also received a lump sum to set up a fund that is to be used exclusively to cover the cost of the Nyungne practice to be conducted at the nunnery every year. 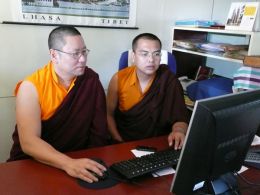 The sponsorship of Translation projects in 2008 continues with the imminent publication of two new prayers books in English: the Nyingma Monlam Chenmo Prayer Book and the Palyul Choe Chyod. It is the first time that these two books have been translated into English. Both books feature original Tibetan text with English phonetics and meaning. Translated by Lopon Phuntsho Gyeltshen of Ngagyur Nyingma Institute and edited by Lama Dondrup Dorje. The translation and publication of both prayer books has been sponsored by Pathgate Partnership Programme, and are being published by Namdroling Monastery in conjunction with Pathgate Institute for Buddhist Studies. 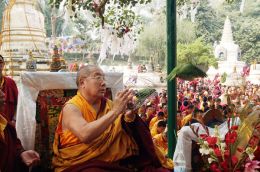 ‘The Compassionate World of His Holiness Penor Rinpoche’, a film which was released in early 2008 by Pathgate Institute, is now available in widescreen presentation with a choice of 12 languages which include Tibetan, Bhutanese, Nepalese, Mandarin, Cantonese, English, French, German, Greek, Portuguese, Spanish and Italian. The films, in either NTSC or PAL format, are available from the office of Namdroling Monastery, and from many Palyul Centres worldwide such as centres in Hong Kong, Taiwan, Singapore, USA, Australia, England, Greece, Ireland and Portugal. If you wish to receive a copy by post, please email This email address is being protected from spambots. You need JavaScript enabled to view it. for details. 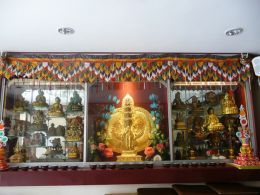 Other projects supported by the Pathgate Partnership Programme in 2008 include funding for the setting up of a new altar for Mahakala Protector practice at the Palyul Nyingma Buddhist Association in Singapore. Previous support for the Singapore Palyul Centre has included the procurement at their request of two Buddha statues 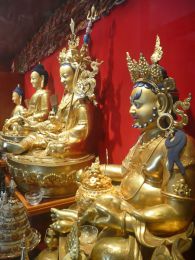 - one of Shakyamuni Buddha and one of Zambhala - for the shrine room at their new centre. In Bhutan, plans for the establishing of a retreat centre there has been quietly proceeding for over two years. In 2008, phase one of a retreat centre began with the renovation of a retreat house to be used for the purpose of three year, three month retreat, while full funding has been provided for the construction of a prayer hall and supporting facilities for a small number of nuns in the Buddhist Kingdom. Part funding has also been granted to a housing project in South India for a small number of monks originating from a small Beri monastic community in Eastern Tibet. 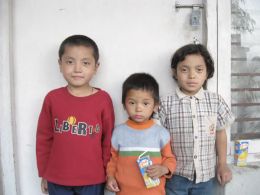 Ongoing programmes, which started in the 1990s, sponsoring education for young people, support for the elderly and medical services for the needed, have continued throughout 2008 in India, Bhutan, Mongolia, Nepal, Bangladesh and Africa. In addition, sponsorship and specific support for a whole range of projects have also been extended to a great number of individuals from around the world. These and much more are merely a brief description of some of the compassionate activities supported by the Pathgate Partnership Programme. None of these could have been possible without the generous support from the students and friends of Pathgate Institute. If you wish to support the Pathgate Partnership Programme and become a Friend of Pathgate International, please click on Make an Offering.