Meeting Of The Three Buddhist Paths 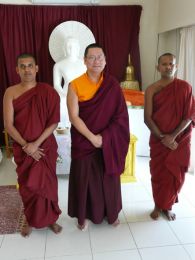 On a recent visit by Lama Dondrup Dorje to the drought-ridden island of Cyprus, which was preceded by auspicious signs, with rainfall the day before he arrived and also during his stay there, Lama Dondrup Dorje gave teaching on a range of subjects, which cover Buddhist Medicine and Healing, Meditation and Medical Qigong. He was also invited to visit the local Sri Lankan Buddhist Temple, which serves the 20,000 Sri Lankans living and working on the island. There he met with the Temple’s resident monks, Rev. Sumeda and Rev. Mahinda, who kindly invited him to join them for lunch, which comprised of Sri Lankan food cooked by the Sri Lankan community. During the course of the visit, Lama Dondrup Dorje exchanged views with his hosts on a wide range of topics on the Buddhist Paths which are common to the Hinayana Path they follow and the Vajrayana Path which Lama Dondrup Dorje represents. The visit undoubtedly goes a long way to promoting friendship and understanding between Dharma brothers from two different Buddhist traditions. 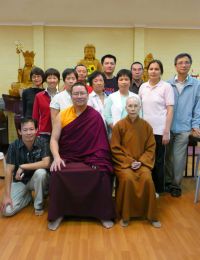 Lama Dondrup Dorje is due to visit Cyprus in early December 2008 and Australia in late February 2009. For details, visit Teaching Schedule.