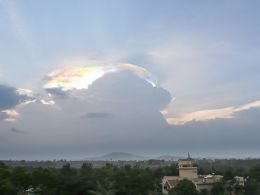 The annual rainy season retreat commenced this summer at the Namdroling monastery on the 17th August. Known as yarney in Tibetan, meaning “summer promises”, the rainy season retreat traditionally started on the 15th day of the 6th lunar month of the Tibetan calendar for a period of six weeks. During the retreat, the monks remained within the grounds of the monastery and reflected on their vows in accordance to the Vinaya Sutra, the Buddhist canon on monastic discipline as instructed by Buddha Shakyamuni. The yarney is a period of intense practice and meditation with vast benefit generated for the greatest good of all sentient beings. 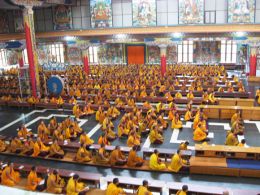 On the first week of the retreat, a rainbow cloud in a fusion of multi-colours was observed in the sky above Namdroling Monastery after the conclusion of a day-long puja conducted for the long life of His Holiness Penor Rinpoche – a most auspicious sign that the objective of the puja was a success.

The origin of the rainy season retreat can be traced back to the time of Buddha Shakyamuni 2500 years ago when it was customary for the ordained community to remain indoors within the boundary of the sangha during the rainy season so that they would avoid inadvertently stepping on the many insects that flourish on the surface of the ground during this period if they were to travel outdoors.

Six weeks after the commencment of the rainy season retreat, yarney was brought to an end at the completion of gak ye, the ritual which releases the monks from the vows they took at the beginning of the yarney. The conclusion of the retreat happened to coincide with the arrival of His Holiness Penor Rinpoche back to the monastery from the USA. To celebrate this joyful occasion, a rest period of a three-day holiday with open-air picnics was announced, which was well received and welcomed by everyone.