In June, Lama Dondrup Dorje was invited by the Khmer Workers Forum (KWF) in Sydney, Australia, to give a talk at their monthly meeting. The topic they asked for was “Maintaining Mental Health and Well-being from a Buddhist perspective”. Based at the office of the Cambodian-Australian Welfare Council of NSW, members of the KWF are principally social workers responsible for the welfare of the local Cambodian community. They also function as a network for other agencies to attend and to share information in connecting with services and resources in serving the needs of the Cambodian community in the Sydney area.

Lama Dondrup Dorje shared with his hosts the benefit of training one’s mind in promoting harmony in the dealing of mental health issues in the community as well as offering a fresh perspective from the Buddhist view point on how to generate greater flexibility and harmony in every day relationships for all concerned. 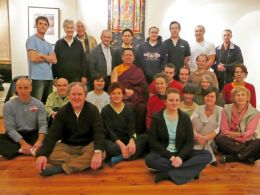 The next two days of Lama Dondrup Dorje’s stay in Sydney was spent giving Dharma teaching on the ‘Truth About Karma’. He also gave refuge to a group of students at their request, as well as instructing them on how to utilise Classical Qigong practice to eliminate afflictive emotion and karmic energy from the bodily organs associated with the three burners. 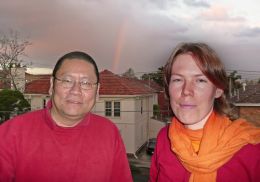 ‘Eight Verses of Mind Training’ was the main subject of Dharma teaching in Melbourne while explanation on ‘Joyful Parenthood’ was requested by the students in Phillip Island. Seminars on Classical Qigong practice and meditation were well attended by doctors and other Qigong practitioners from all parts of Australia. As usual, auspicious signs of rainbow and out-of-season rainfall were more abundant than ever during the course of Lama Dondrup Dorje’s stay in Australia. Lama Dondrup Dorje is scheduled to return to Australia in early November.