The Heart-Shrine Relic Tour In Athens 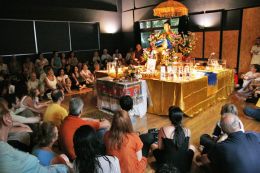 The Heart Shrine Relics Tour of the Maitreya Project, which features a unique collection of sacred Buddhist Relics, arrived in Athens in early July. For three days, the public was able to view for themselves the precious relics that will in the future be on permanent display in the Heart Shrine of a statue of Maitreya Buddha standing 152m high that is to be erected in India at Kushinagar, where Lord Shakyamuni Buddha attained Parinirvana 2500 years ago. Until then, as is the wish of the Spiritual Director of the Maitreya Project, Lama Zopa Rinpoche, the collection is travelling around the world to bring the blessings of the Holy Relics and the message of loving-kindness and compassion to people far and wide. 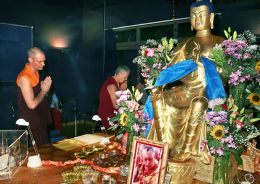 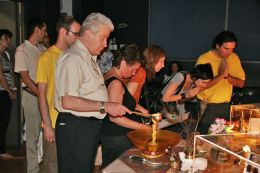 The Heart Shrine Relics Tour was bought to Athens by the students of Lama Zopa Rinpoche. Thubten Dawa Loday and Thubten Dorje Gyaltsen, two resident monks of Lama Dondrup Dorje in Athens, were also invited to help with the organisation of this auspicious event. The opening of the exhibition on the evening of Friday 4th July was very well attended. In the opening speech, Ani Syliana, one of the tour organisers, explained that when one views the relics, one should connect with the loving-kindness and compassion within one’s own heart, at the same time keeping friends and loved ones who did not have the opportunity to attend the exhibition in mind. It is said that just seeing the Holy Relics of Lord Buddha and other great masters purifies an incredible amount of negative karma. 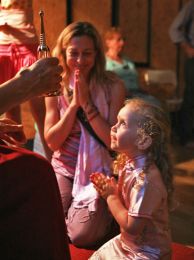 People were then invited to make a Buddha Bath Offering and to view the Holy Relics. They were encouraged to read the verses from the Sutra of Golden Light as they perform circumambulation around the shrine for the purpose of promoting World Peace. They were also invited to write with a gold pen over a feint copy of the Sanghata Sutra in English. Finally, opportunity was available for everyone to receive blessing from having a small stupa containing the relics of Lord Shakyamuni Buddha placed on their crown.

Over the next two days, a constant stream of people came to view the Holy Relics and to receive blessing. Many were visibly affected by the experience with tears welling up in their eyes. Some seemed stunned and sat in the exhibition absorbing the great sense of harmony and peace emitted by the relics. Some reported they had felt a cleansing energy passing through their bodies into the ground. Many in fact returned again numerous times to the exhibition, bringing each time more friends and relatives with them. One young man, who was there on the opening night with a bandage around his injured hand returned on the last day without the bandage, saying that to his amazement his injury had completely healed since the stupa containing Buddha’s Relics was placed on his injury.

Due to the success of the exhibition, the organisers have already set a date for the return of the Holy Relics to Athens in 2009.