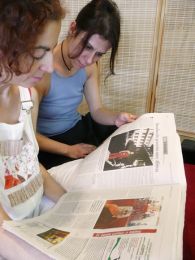 The following day, Vana Prentza, a reporter from Alpha TV, a national TV station in Greece, who having read the newspaper article contacted Thubten Dawa Loday and expressed her interest to interview him. When Dawa replied that his teacher Lama Dondrup Dorje was teaching at that moment in the Pathgate Dharma Centre in Athens and suggested to her that it would be far better for her to interview his teacher instead, she was very happy to comply. 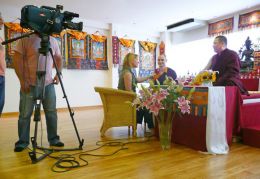 The filmed interview lasted for over half an hour and covered a range of subjects that spanned both local and international concerns, from a Buddhist perspective. When asked about what the problems were in Athens and how the Buddhist practice could help, Lama Dondrup Dorje replied that Athens was “a most precious place for practice because with so many people, the conditions can be very challenging; so a place like this is a perfect place to practise compassion, patience and generosity.” He explained that problems are a matter of perspective and to a Buddhist practitioner with the right view; these problems are in fact an opportunity to apply the teaching and improve one’s Dharma practice.

Lama Dondrup Dorje was also asked to talk about the recent natural disasters of earthquakein China and cyclone in Burma, as well as other afflictions affecting the world as a whole and the remedies to these afflictions. To read the transcript of the TV interview, click here.

After the interview, the reporter, Vana Prentza, commented that Lama Dondrup Dorje’s smile was an expression of the peace and joy within him, and that she had really enjoyed listening to Lama Dondrup Dorje and could listen to him for hours. Seeing that the Pathgate Institute Summer Retreat will be taking place in Greece from 28 July to 8 August, her wish could become reality.