Shower of Blessing in Spain

Lama Dondrup Dorje was invited to Seville in Spain during the weekend of the 16th to 18th of May to give a series of teaching on Dharma topics, Meditation and Qigong. The three day event was held at a convention centre which was once a Christian monastery outside the centre of Seville. 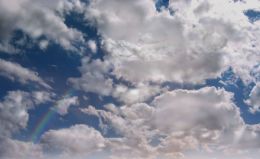 The arrival of Lama Dondrup Dorje at the convention centre on Friday was greeted by an auspicious welcome of a sudden rain shower, which surprised the local Spanish students as it was an uncommon phenomenon for that time of the year. Clear weather then returned for the next two days right until the time of the last teaching on Sunday evening when the sky suddenly opened up again with a burst of heavy rain, followed by the appearance of a rainbow overlooking the venue. It was not to be the last sighting of a rainbow. The following morning, another rainbow appeared in the sky throughout the best part of a car journey when Lama Dondrup Dorje was driven from Seville to Malaga to catch a flight back to England.

His Holiness Penor Rinpoche has explained that the appearances of shower and rainbow during the proceeding of Dharma activities are auspicious signs that the Nagas, which control the elementary forces of weather, and other local deities, are rejoicing that Dharma activities are being propagated. To many students of Pathgate Institute, the sighting of such phenomena are quite common whenever Dharma teachings are being given by Lama Dondrup Dorje, whether it is at the Summer Retreat in Greece or elsewhere at other locations around the world. 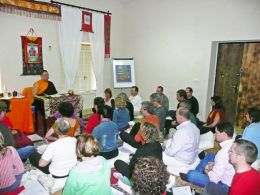 The teaching given by Lama Dondrup Dorje on his visit to Seville was well received by not only the local students but also by many others who travelled there from other parts of Spain and from further afield. Touched by their enthusiastic response and the sincerity of their request, Lama Dondrup Dorje has agreed to return to Seville to give further teaching and to lend support to the setting up of a Pathgate Study Group for the local students. Prayer books with Spanish translation had already been prepared and distributed to those students who wish to follow a daily practice schedule. Lama Dondrup Dorje’s next visit to Seville will take place on the weekend of 11th to 13th of July. For details, please visit Teaching Schedule.