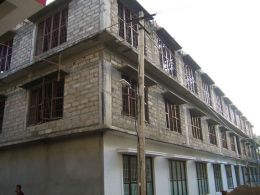 The construction of a brand new 3-storey building for the Ngagyur Nyingma Institute at the Namdroling Monastery in India is at the final stage of completion. Sponsored entirely by Pathgate Institute, the new building will provide seven good-sized classrooms and accommodation for over one hundred students with bathroom facilities available on each floor. The sponsorship also provides funding for a brand new transformer to be installed, which will reduce the monthly expenditure on electricity usage for the Shedra in the coming years. 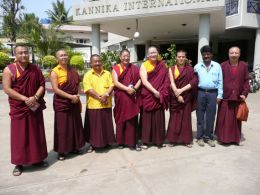 The proposal of having a new building for the Ngagyur Nyingma Institute, which has at present 850 students undergoing a nine-year programme of Higher Buddhist Study, has been in discussion for several years. As the need for additional classrooms and student accommodation became increasingly urgent, request for the project to start was made to His Holiness Penor Rinpoche by the faculties of the Ngagyur Nyingma Institute in the autumn of 2007. Out of compassion for their plight, His Holiness Penor Rinpoche granted them permission for the construction to commence and promised them financial support if they could not secure outside funding for the project. The faculties then approached Lama Dondrup Dorje to enquire his willingness to take on the task of sponsoring the entire cost of construction. With encouragement and blessing from His Holiness Penor Rinpoche, Lama Dondrup Dorje managed to raise the full amount needed for the construction before 2007 came to close. By the beginning of March 2008, the third floor of the building was almost ready to be roofed while the classrooms on the ground floor were at the final stage of interior outfitting, ready to be used for holding classes by the start of the new academic year. 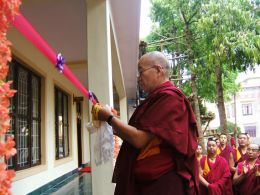 On the 20th March 2008 (14th day of the 2nd Tibetan month), Khenpo Pema Sherab, the most senior Khenpo at Namdroling Monastery, performed an official ceremony to declare the opening of the building for classes on behalf of His Holiness Penor Rinpoche, who was unable to attend due to overseas commitment in Hong Kong. The construction of the new building for the Ngagyur Nyingma Institute is one of many projects sponsored by the students and friends of Pathgate Institute from around the world. If you wish to support the various on-going projects of Pathgate Institute in propagating Dharma worldwide for the benefit of all sentient beings, you may do so by becoming an active partner in the Pathgate Partnership Programme. For details, please visit the Donation Page.