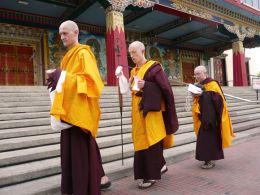 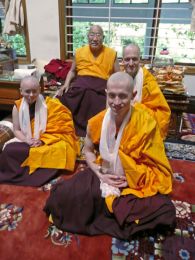 The latest members to join the ordained sangha of the Pathgate Institute are Thubten Tenzin Sangpo, Thubten Sonam Sangpo and Thubten Sherab Palmo. All three have received extensive instruction from Lama Dondrup Dorje over a period of several years. During their stay at the monastery, Lama Dondrup Dorje arranged several audiences for them to pay respect to some of the most senior Tulkus and Khenpos at Namdroling. They were warmly received by Gyang Khang Tulku, Musang Tulku, Ajam Tulku, Orgyen Tulku, Khenpo Tsewang Gyatso, and Khenpo Pema Sherab.

On their first meeting with Khenpo Pema Sherab, the students received teaching on the importance of Vinaya in relation to the preservation of Buddha’s teaching. Khenchen talked about the difficulties experienced by the ordained in the west and the importance of following the precepts to protect one from wandering off the path. He explained the Ordination Vow is a life-long commitment and by taking the Vow, one promises that one will protect this vow until the end of one’s life. He spoke of the three practices of Morality, Concentration and Wisdom. He said that the most important thing was the renunciation of worldly life and that the motivation should be to achieve liberation for oneself, freedom from Samsaric suffering. 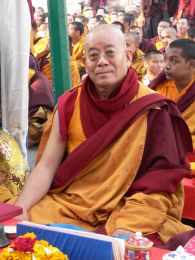 The trip to the monastery has been a most fruitful experience for the students, who included two other ordained members of the Pathgate Institute – Thubten Yeshe Gyurme and Thubten Wodzer Drolma. Not only did they receive precious advice from Tulkus, Khenpos and Lopens they met, they were also able to experience the atmosphere of celebrating the Losar and the Drubchen at the monastery. On the first day of their arrival, they were invited to accompany Lama Dondrup Dorje to attend a dinner given by His Holiness Penor Rinpoche. During the remainder of their stay, they were guests at numerous luncheons given by friends of Lama Dondrup Dorje at the monastery. At one meal given by the faculties of the Nyingma Institute, which include the Shedra Principal Khenpo Khenche Norbu, Tulku Choku, Lopen Tashi Palden and Lopen Jigme Trulthim, the students were given gifts of monks clothes and robes.

The final advice they received from His Holiness Penor Rinpoche before departure was the importance of protecting their vows.