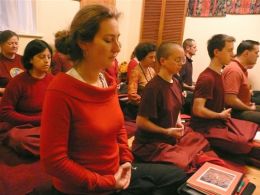 As the year 2007 came to an end, students from France, Italy, Spain, Portugal, Germany, Greece, China, Ireland, Mexico, and the UK, attended an end of year five-day retreat on Dharma Foundation Study with Lama Dondrup Dorje at the Palyul Tibetan Buddhist Meditation Centre in Newcastle upon Tyne, England.

Over the period of five days Lama Dondrup Dorje gave students an opportunity to develop practical experience on Quiet Sitting in the Vairocana meditative posture. The students also received in-depth explanation on the Principles of Buddhism such as the Four Dharma Seals and the Four Noble Truths.

The aim of the Dharma Foundation Study is to give students the opportunity to become familiar with the Principles of Buddhist Teachings and Meditation before commencing on more specified Dharma Study.