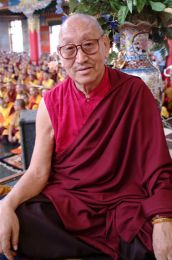 On the morning of the 3rd October in Hong Kong, the Venerable Chodak Gyatso Rinpoche, seated in a full lotus meditative posture in his room at the Hong Kong Palyul Dharma Centre, entered beyond this world into the pure realm. He was ninety years of age. 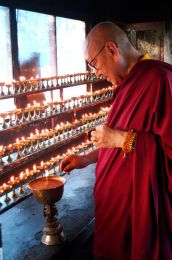 The Venerable Chodak Gyatso Rinpoche was born in the region of Dege, the cultural centre of Kham in Eastern Tibet. He was recognised at age seven as the incarnation of the mind aspect of Pema Tondrup. After recovering from a serious bout of ill health at age ten, he embarked upon diligent studies of Tibetan Medicine and Astrology. Soon after he received Novice Ordination of Getshul Vows at Minling Monastery, he went into retreat for three years and eight months during which he completed the required accumulation of preliminary Ngondro practice and the accomplishment of the Three Root practices. 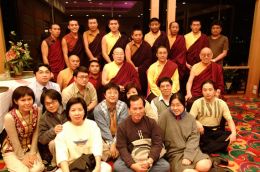 In 1961, he was advised by Dudjom Rinpoche to relocate to the Mysore district of India. There, at the newly established Tibetan settlement of Bylakuppe, he received the Full Ordination of Gelong Vows from His Holiness Penor Rinpoche. Under the guidance of Penor Rinpoche, he continued to study all the major teachings of the Nyingmapa, he also played an instrumental role in acquiring land from the Indian government – the land upon which Namdroling Monastery was to be built. For nine years, he was responsible for the running of the medical clinics at the monastery as well as serving as the medical advisor to His Holiness Penor Rinpoche. 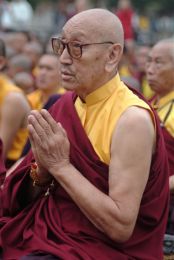 In 1991, Chodak Gyatso Rinopche was appointed by His Holiness Penor Rinpoche to take charge of the Palyul Dharma Centre in Hong Kong. He also assisted His Holiness in the establishing of Palyul Dharma Centres in Singapore, the Philippines and Macau. Over the years, Chodak Gyatso Rinpoche has tirelessly supported many Dharma activities at the Namdroling Monastery for the sake of all sentient beings. He was the principal sponsor of the three-month Rinchen Terzod Empowerment and transmission in 2001 and the transmission of Nyingthig Yab Zhi early this year. Renowned as a Master of Chod practice, his compassionate presence will be missed by all his students who valued his spiritual advice and guidance. 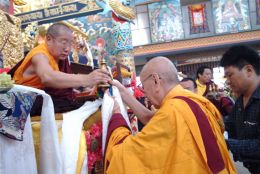 For the sake of students who wished to pay their respect to the Venerable Chodak Gyatso Rinpoche, a brief ceremony was held on the 6th October at the Universal Funeral Parlour in Hung Hom, Kowloon. 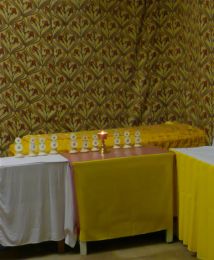