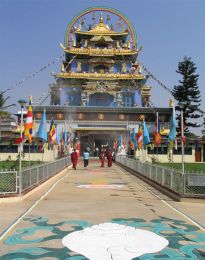 New to the Pathgate Theatre is a film offering a virtual tour of the Zangdok Pelri Temple at Namdroling Monastery in South India. The construction of Zangdok Pelri Pema Odki Phodrang (the Light Rays Palace of Padmasambhava on the Golden Copper Coloured Mountain) began in 2002 and was completed in 2004.

The exterior wall of the Zangdok Pelri is finished in four different colours to symbolise crystal, lapis lazuli, lotus ruby and sapphire in accordance to the depiction in the tantra. The altar at the ground level shrine hall contains seven statues such as Buddha Shakyamuni, Guru Padmasambhava, and Chenrizig. A separate entrance by the side of the temple leads you to the Zangdok Pelri Pema Odki Phodrang. On the first floor, inside the Nirmanakaya mansion at this level is the statue of Guru Padmasambhava surrounded by his eight manifestations such as Padma Jungnas, Padma Gyalpo, Nyima Odzer, Senge Dradrok and Dorje Drolo.

To view this film click on the Pathgate Theatre.