As part of the accumulated practice of the Prayer Week for the Long Life for His Holiness Penor Rinpoche, the Hong Kong Palyul Centre organised a ceremony of Tse Thar: The Practice of Ransom and Life Release aboard a hired ferry in the coastal waters of Hong Kong on Saturday 24th March 2007. Lama Dondrup Dorje, who was in Hong Kong at the time, attended the ceremony and took part in the puja led by Chodak Rinpoche, Head of the Hong Kong Palyul Centre.

The ferry set off at 2.30pm from the sea front of Victoria Harbour towards the coastal waters off Lamma Island. There it met up with a fishing boat laden with catches of close to 2000 marine lives including cockles, octopus and sea fishes of various sizes. The entire stock was transferred onto the ferry to receive blessing before being released back to their natural habitat of the sea. 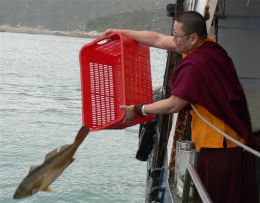 Tse Thar: The Practice of Ransom and Life Release is highly revered as a great Act of Compassion and as an expedient means of Mind Training by all three Buddhist traditions of Hinayana, Mahayana and Vajrayana. The Great Buddhist Master Nagarjuna deemed Life Release as the supremest of all virtuous activity. Its many benefits and the store of merits it may generate are recorded in numerous sutras and tantras. When performed with the right motivation for the benefit of all sentient beings, it has the power to remove obstacles, repay karmic debts, overcome sickness, promote good health, nurture longevity, create auspicious conditions, increase prosperity, and generating merits for the deceased. The ultimate goal of Tse Thar is to enable one to attain the two-fold fulfilment of lasting benefit for oneself and others.

A project to add Tibetan and English subtitles to the 12-hour video presentation of The Life of Guru Rinpoche produced under the directive of His Holiness Penor Rinpoche was first considered in the 1990’s but was never realised. Under an initiative by the Pathgate Institute of Buddhist Studies and the Ngagyur Nyingma Institute, the Tibetan dialogue of the entire video has finally been translated into English. The next stage of this project may involve this video being re-released in the DVD format and the publication of a companion book in both Tibetan and English. Meanwhile The Life of Guru Rinpoche - a trailer of this film was recently shown to His Holiness Penor Rinpoche who was very pleased with the result. To see this trailer, please click Dharma Theatre.