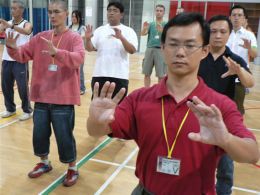 New to the Pathgate Theatre is a film recording of an extract from a Two-Day Seminar given by Lama Dondrup Dorje in 2004 in Singapore on the practice of Classical Qigong with focus on Qi Dynamics, Electromagnetic Energy and Buddha Nature.

This, being the first of a series of Masterclass seminars given in Singapore, took place at the Singapore Police Headquarters in November 2004. During the two-day seminar Lama Dondrup Dorje explained how the energetic structure of the human body comes into being due to the resulting fusion of the original essence that we inherited from birth with that of the heavenly energy which is positive by nature and the earth energy which is negative by nature; and which together give rise to the constitution which the Classics refer to as the fusion of Heaven, Earth & Man. He also explained how the proper grounding of the positive ions of the human energy can displace the negative ions in the ground to give rise to the emerging of an energy bubble around the body which serves as an electro-magnetic field. Lama Dondrup Dorje also explained the inter-related dynamics between the circulation of qi and blood; body mechanics, emotional mechanics, mind mechanics; and the reason why the vast number of practitioners of the classical internal arts are often practitioners of the Buddhist Path. To view this film visit Pathgate Theatre.