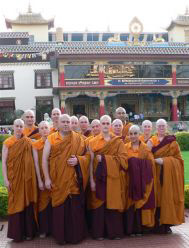 On the 11th day of the first month of Tibetan New Year, fourteen European students of the Pathgate Institute of Buddhist Studies led by Lama Dondrup Dorje arrived at the Namdroling Monastery in South India, to receive the ordination of Getshul Vows from His Holiness Penor Rinpoche. Thanks to Lama Dondrup Dorje making request on their behalf, students were blessed to receive their ordination from His Holiness personally.

During their time at Namdroling, Lama Dondrup Dorje arranged for students to pay respects to many senior tulkus and khenpos at the monastery, several of whom gave the students impromptu advice on taking ordination. 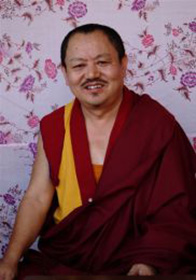 Khenpo Tsewang Gyatso instructed students on the importance of not only taking vows, but also the importance of preserving the precepts for the rest of their lives. He talked of the need in training one's mind to develop confidence in the teaching; and he explained that in this degenerating time, when there are so many distractions and obstacles, it is difficult to maintain the vows, and so the merit of preserving it is one hundred times greater than that in the time of Lord Buddha. 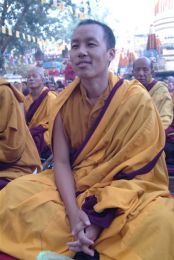 Khenpo Sangye Wangdi, the former Principle of the Ngagyur Nyingma Institute spoke of the importance of renouncing our attachment to samsara and of maintaining our vows throughout our lives for the benefit of all sentient beings. He spoke of the importance of taking refuge in the Buddha as our teacher, the Dharma as the path, and the Sangha as our guide; and of generating a great store of loving-kindness, while developing a spacious and accommodating mind. Khenpo Sangye Wangdi explained the need to dedicate all our virtuous activities and to always look inward, correcting ourselves before trying to correct others. 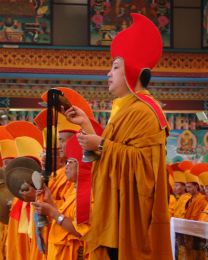 Orgyen Tulku emphasised that Buddhism is not based on blind faith but is about actual practice based on reason. He then spoke with great humility of how we are all practising together to attain enlightenment, about the unbiased nature of Buddhism, and of how we are very fortunate to have such a very great Root Guru in His Holiness Penor Rinpoche and how wonderful that the students have such a skilful teacher in Lama Dondrup Dorje.

At the Ordination Ceremony His Holiness Penor Rinpoche, in front of all the assembled Khenpos, emphasised to the Pathgate students the importance of continuing to follow the guidance of Lama Dondrup Dorje; and the importance of protecting their vows for the rest of their lives, not just taking the vows for a few weeks or months, and of the consequences of not maintaining them. He spoke of the many Tibetans who have been able to maintain their vows, and that if we are able to do so we will become a model ordained Sangha in Europe. As Lama Dondrup Dorje made offerings to His Holiness and the assembled khenpos at the conclusion of the Ceremony, His Holiness Penor Rinpoche instructed Lama Dondrup Dorje of the need to continue to observe and guide the newly ordained in their practice. 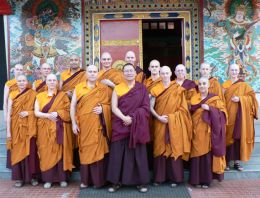 Apart from ensuring the students were properly cared for during their stay at Namdroling, Lama Dondrup Dorje was very much involved in overseeing a variety of Pathgate Partnership Programmes there such as the latest delivery of medical equipment to the Namling Hospital, the progress of a new Tibetan grammar text book for foreign students and other translation projects, as well as the procurement of new equipment for the monastery office and the setting up of other new sponsorships projects which range from the provision of funding for a retreat centre in Bhutan to the construction of new dormitory, office and class rooms at the Tsogyal Shedrub Dargyeling Nunnery. 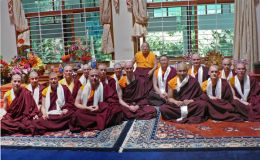 All the students felt a tremendous sense of warmth and support from the monastic community at Namdroling. After their ordination, smiles were everywhere as all who saw them in their new robes congratulated them with joy.

His Holiness's last piece of advice to the students before their departure was practical instruction on how they should conduct their daily life as an ordained community and to emphasise the importance and benefit of protecting their Getshul Vows. 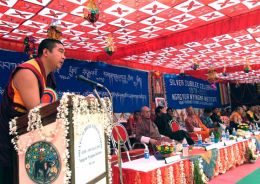 One final impromptu advice they received was at the Paris Charles de Gaulle International Airport from Khenpo Chimed Tsering who was arriving on the same plane from Bangalore. Khenpo Chimed Tseringhas founded many Palyul Dharma Centres and monasteries in Nepal, in addition to being the Head of the Buddhist Religious Affairs in the Nepalese Government. He was very happy to see Lama Dondrup Dorje and advised the newly ordained that to become a new monk or nun can be very exciting but they must not expect speedy results. Instead they should maintain a process of stable practice. He said that His Holiness Penor Rinpoche is a living Buddha and that we are all very fortunate to have the same Root Guru. He told the students that His Holiness speaks highly of Lama Dondrup Dorje's skilful means and so it is very good for students to follow his guidance.