New Dharma Tale – The Hare On The Moon 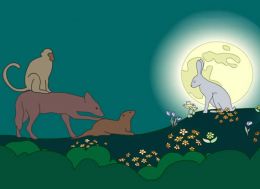 New to Dharma Tales is the story of The Hare on the Moon, which tells us why the image of a hare can be seen on the surface of the moon. The tale is an ancient legend of the virtue of sacrifice, recounting the past life of Shakyamuni Buddha, when he was born as a hare, and sacrificed his life in order to offer his flesh as food to a hungry stranger, who was in truth Sakka, Lord of Heavenly Beings in disguise.

This Dharma Tale is also the latest project to be started as an animation feature, following the success of the animation 'With Wings That Fly Not'. To read the story, click on The Hare On The Moon.