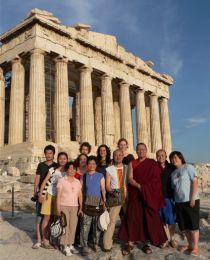 The Pathgate Summer Retreat took place this year at Epidavros in Greece during the month of August. The retreat was well attended by students from around the world including first time participants from Australia, Italy, Ireland, Cyprus, Greece, and UK. Each day's programme began at 6am with meditation, prostration practice, Qigong (Energy Yoga) and Taiji Chuan. This was followed by a range of Tibetan Buddhist practices such as Ri Wo Sang Cho, Vajrakilaya puja, Praising of Manjushri, Shakyamuni Buddha puja, Tara puja, Guru Yoga throughout the course of the day.

Over the period of 12 days, Lama Dondrup Dorje gave teaching and commentary on a wide range of Mahayana and Vajrayana topics including explanations of many Buddhist prayers and pujas; the true meaning of the Four Dharma Seals, the Four Truths, the Noble Eightfold Path, the Six Paramitas, and so forth. Each teaching was brought to life by an extensive range of examples given by Lama Dondrup Dorje on how to bring true the effectiveness of Buddha Dharma to eliminate obstacles and conflicts one experiences in daily lives. Such examples were so vivid and practical that the students were left without doubt that the feasibility of living a life of natural harmony, that is not separ`ated from the Truth as taught by Lord Buddha and other great Realised Masters, is truly within their ability to do so.

Apart from tirelessly answering questions from students throughout the retreat even during mealtime and rest period, giving impromptu teachings and showing examples of mindfulness in action and joyful living, Lama Dondrup Dorje's healing ability and advice on harmonious living were also very much in demand by members of the local communities who presented to him a marble statue of Hippocrates, the Greek physician who is revered as the Father of Medicine in ancient Greece. The retreat was successfully concluded on the 25th of August with many new students taking refuge while a significant number of long time students expressed strong wishes to be ordained pending approval by His Holiness Penor Rinpoche.