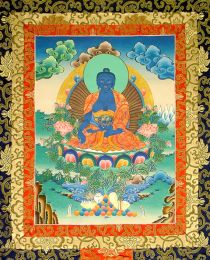 Lama Dondrup Dorje made a brief visit to Athens recently at the invitation of the members of the Palyul Sangha International in Greece. Over the course of two and half days he saw a stream of people seeking advice and counsel during the day and gave private teaching in the evening to a small group of students on the Healing Power of Buddhist Medicine. The healing power of Lama Dondrup Dorje was very much in evidence throughout his stay. Here is a sample of cases treated by Lama Dondrup Dorje in Athens.

Vasiliki Mihalaki, a dietician, suffered from colitis for fourteen years with constant discomfort and bloating of the stomach. Lama Dondrup Dorje treated her for one minute before a whole group of students. To everyone's amazement, the bloating and pain she had been experiencing for fourteen years simply disappeared. Vasiliki was speechless from shock and just laughed. 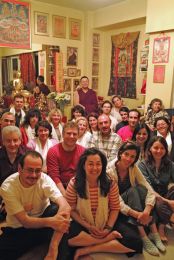 Maria Koulopoulou, a physiotherapist, was suffering from severe pain caused by acute tendonitis. Lama Dondrup Dorje treated her for thirty seconds, then told her to have an early night. The next day she was amazed to discover the pain had gone and she had regained full flexibility of her arm with no discomfort.

David Hands, a cameraman/editor came from Cyprus specifically to see Lama Dondrup Dorje. Apart from being a sufferer of lower back pain for three years caused by a work-related injury, he felt energy blockages in his body due to the negativity he picked up over ten years of filming in conflict zones such as Bosnia, Iraq and Israel. Lama Dondrup Dorje briefly treated his back on the day of his departure. Afterwards David started laughing with joy saying that he felt like all the spaces between his vertebrae had opened up and he felt heat being emitted from them.

Magdalena Ladwig, a German lady, had been in a serious accident the previous year, which had damaged her knee, making it inflexible, and so she could not sit cross-legged without experiencing pain. On the second night, she suddenly announced excitedly that her knees had become flexible again and that she was able to sit cross-legged without any discomfort or pain for the first time since her accident. This was the lady, who eight years previously had come to the Pathgate Summer Retreat in Epidavros, with a cancerous tumour the size of a grapefruit in her uterus, which the doctors had told her needed to be surgically removed urgently. One morning, after three days on the retreat receiving Dharma teaching from Lama Dondrup Dorje on the importance of letting go of certain attitudes in life, she approached Lama Dondrup Dorje saying that something strange had happened to her. She said that she had felt a strange movement in the region of her tumour the previous evening and by the morning she could no longer feel the presence of the tumour. She recently had a medical check up and was told that the tumour has now reduced to the size of a tiny seed and is harmless. 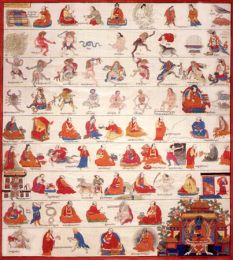 Not only did Lama Dondrup Dorje bring relief to the medical conditions of many students, he also pacified the mental turmoil they suffered. Maritsa Kypriatou, an elderly lady in her eighties, was full of bitterness and dissatisfaction about many areas of her life, especially in her relationships with those closest to her. Lama Dondrup Dorje compassionately answered all her questions, then provided her with practical solutions to her problems. By the end of the evening, she became a much more relaxed person. Her face, which had started off being tense and twisted, was transformed into a calm content face of someone who has answers and a sense of direction.