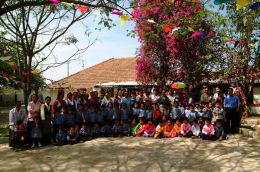 A recent revisit by Lama Dondrup Dorje to the Arlikumari Nursery School in Bylakuppe, South India, found the school buildings remained in sound condition. The school first received funding support in 2001 from Pathgate Institute of Buddhist Studies for the construction of a new extension, a new water tower with bathrooms, new carpets and a full range of modern educational tools for the classrooms, concrete flooring for the playground and the erecting of a school wall and front gate to enclose the entire school. The new facilities were blessed and officially opened by His Holiness Penor Rinpoche in the spring of 2002. Before the renovation of the nursery, the school had no enclosing wall and no gate. Stray dogs had been known to wander in and the playground became a muddy field during rainy season. Now, the children enjoy going to school, where their parents feel that their children are in a safe environment, with the risk of disease due to poor hygiene being much reduced. (See photo).