The Passing of Lama Lobsang Choephel 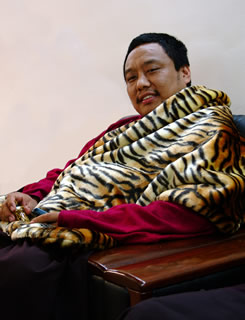 Chakzod Lama Lobsang Choephel, the long-time attendant and the secretary to His Holiness Penor Rinpoche passed away in India on Saturday 3rd March at 4.30am. Due to the seriousness of his condition, he was admitted six days earlier into the Intensive Care Unit of the Columbia Hospital in Mysore on Sunday 26th February. Upon his passing, his body was transported to Namdroling Monastery on the morning of the 3rd of March. Ceremony of Phowa and Monlam practice led by His Eminence Gyangkhang Rinpoche was performed by the ordained sangha of the Shedra, Dratsang and the Ani Gompa.

The cremation of Lama Lobsang Choephel took place at Namdroling Monastery on Monday, 5th March, 2012 (the 12th of the Tibetan calendar). At 5.30am, ceremony of fire puja of the Three Deities; the mandala of Shitro (the 100 Peaceful and Wrathful Deities), Dorje Sempa (Vajrasattva) and Opame (Amitabha) were performed by His Eminence Gyangkhang Rinpoche and a group of chosen sangha.