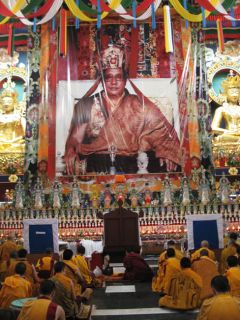 The Anniversary Puja for HH Pema Norbu Rinpoche took place this year between Thursday, the 22nd to Saturday, the 24th of March in Namdroling Monastery in India. A grand Tsog offering was held at the conclusion of the three-day ceremony. Over the course of three days, Shitro and Lama Chodpa ceremony were performed by HH Karma Kunchen Rinpoche, Khenchen Pema Sherab, Khenchen Tsewang Gyatso and Khenchen Namdrol at the main temple; the main Dratsang was led by HE Gyangkhang Rinpoche; Vajrasattva and Lama Chodpa ceremony were performed by the ordained sangha from the Nunnery at the Zangdok Palri Temple; while the junior monks from the Primary School accumulated the Swift Return prayer of His Holiness Penor Rinpoche. Nearly 200 Palyul students from overseas travelled to India to attend the three-day ceremony. 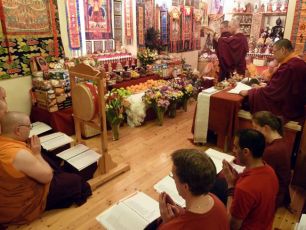 At the UK main centre of Pathgate Institute in Newcastle upon Tyne, Vajrasattva, Shitro and Lama Chodpa ceremony with Tsog offering at each evening were conducted over three days from early morning till late. Many European students travelled to the UK to participate in the three day ceremony. They were joined by the local sangha of English, Irish, Greek, Cypriot, Tibetan, Chinese and Japanese students. The large amount of Tsog food offering at each day practice was presented to the local People's Kitchen for the homeless.