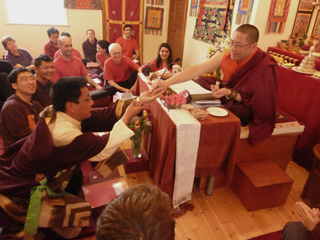 The 2012 Pathgate UK Easter Retreat, which was held from the 6th to the 11th of April, was well attended by students travelling from as far away as Canada, Romania, Italy, Greece, Brussels and Ireland. UK students aside, foreign participants at the retreat came from a diversity of country origins such as Japan, China, Tibet, Singapore, Spain, Australia, New Zealand and Cyprus.

The main subject at the six-day Easter Retreat was the Classical Buddhist Medical Qigong Foundation Level One Intensive Study. The daily schedule for the Retreat included Buddhist prayer practices, Dharma teachings, meditation and extensive instruction on Classical Medical Qigong given personally by Venerable Lama Dondrup Dorje. One of the students reported blurred vision and difficulty seeing at the end of the Retreat. Visiting his eye consultant for tests, they were surprised to find a dramatic improvement in his eyesight, such that it was necessary to change the lens of his glasses to a much weaker prescription. His eyesight is now much better than before.