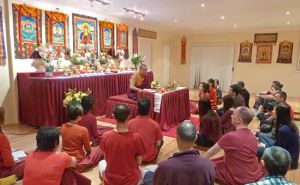 On his recent visit to Australia in September, Ven. Lama Dondrup Dorje gave teaching at the newly completed shrine hall of the Pathgate Dharma Centre in Sydney. The construction project started in 2011 with most of the funding generated from the support of local sangha. The new facility will be used as the base for the Australian Pathgate Summer School which is scheduled to start in 2014.