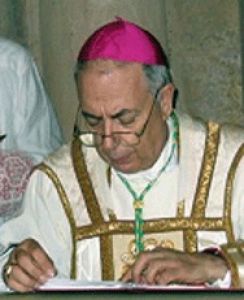 Over the course of many months in 2012, a former Archbishop of the Old Roman Catholic Church and monk of the Camaldolese Congregation of the Order of Saint Benedict, the Ven. Mgr. Dr George Papathanasiou, who lives in the north of Greece, has been in regular contact with the Pathgate Dharma Centre in Athens. The Camaldolese Benedictines have a strong tradition of inter-faith dialogue and warm relationships with other established belief systems. Ven. Mgr. Dr George Papathanasiou has studied extensive Buddhist texts and professes to having been infused by the spirit of Buddha’s compassion bringing peace into his life. Through his connection with the Pathgate Dharma Centre in Athens he became aware of the compassionate activities of His Holiness Penor Rinpoche and of Ven. Lama Dondrup Dorje. Although they have not yet met, Ven. Mgr. Papathanasiou recently sent a letter to Ven. Lama Dondrup Dorje. In his letter, Ven. Mgr. Papathanasiou expressed his heartfelt gratitude for the blessing he has received from being influenced by the compassionate activities of both His Holiness Penor Rinpoche and Ven. Lama Dondrup Dorje. In addition, he thanked Ven. Lama Dondrup Dorje for his presence in Greece and for imparting the teachings of Buddhist compassion and wisdom, filling the hearts of his fellow Greeks, who are experiencing great suffering in the current financial crisis.