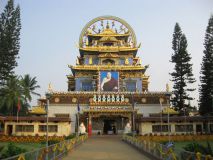 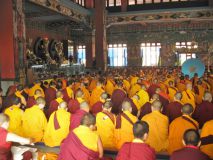 Pujas to commemorate the Anniversary of His Holiness Pema Norbu Rinpoche’s Parinirvana took place this year at Namdroling Monastery in India as well as at all the Palyul Centres around the world. 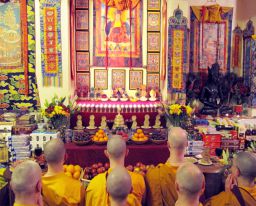 At the Pathgate Dharma Centre in Newcastle upon Tyne, England, puja was held from morning till late evening on the actual day of the anniversary attended by local ordained and lay students joined by students from overseas. After the conclusion of the ceremony, vast quantities of food offerings made during the Anniversary puja were taken to the local People’s Kitchen, to help feed the homeless.