Kudung Zhugbul (Offering of the Holy Body to Fire) - the cremation of the Kudung (Holy Body) of His Holiness Drubwang Pema Norbu Rinpoche took place on the 13th Day of the Fourth Month of the Tibetan Calendar (23rd May 2013) at Namdroling Monastery in South India. The ceremony was attended by tens of thousands of devotees from around the world.

His Holiness passed into Parinirvana on 27 March, 2009, accompanied by many miraculous signs. His Kudung (holy body) was kept on the first floor of Zangdokpelri Temple in Namdroling Monastery for four years so that everyone who wished to pay their homage may receive blessings. 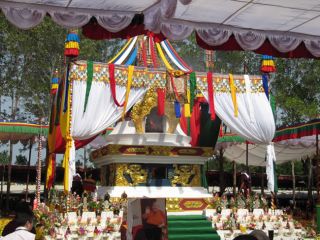 After consultation with senior Nyingmapa masters this year, it was decided by the Namdroling Monastery Management Committee that the time had come to perform the Kudung Zhugbul of His Holiness Pema Norbu Rinpoche so that blessings would be able to reach further afield through the recovery of the relics from the Kudung of HH Pema Norbu Rinpoche.

While the cremation ceremony was taking place at the Namdroling Monastery in India, report was forwarded to India that the auspicious sign of rainbow appeared over the Palyul Monastery in Tibet, the traditional monastic seat of His Holiness as Palyul’s Eleventh Throneholder.

On the third day after the cremation ceremony which was also Saga Dawa Duchen, the anniversary of the Birth, Enlightenment, and Parinirvana of Shakyamuni Buddha, His Holiness Karma Kuchen Rinpoche, the Twelfth Throneholder of the Palyul lineage, unsealed the Kudung Choeten (Stupa of the Holy Body). 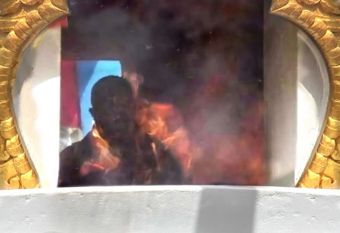 From inside the Kudung Choeten, large bones that include the skull with the heart by its side and small bones from the fingers and toes were collected from the remain of ashes.

They reported the following relics were found in the Cremation Stupa:

When the cremation stupa was dismantled and taken to the ocean where it was cast into the sea, many auspicious rainbows appeared in the sky.

Acting in accordance to the advice of His Holiness Chatral Sangye Dorje Rinpoche, construction of a stupa is to be built within the Zangdokpelri Temple at Namdroling Monastery. HE Mugsang Kuchen Rinpoche is to oversee the construction of this stupa with assistance from stupa master, Lama Ngawang.

The stupa will be constructed in a single piece, 21 feet in height,13 feet in width with a throne of 7 feet in height. Construction of the stupa is expected to take a year and a half to complete.