Review of Pathgate Activities in 2013 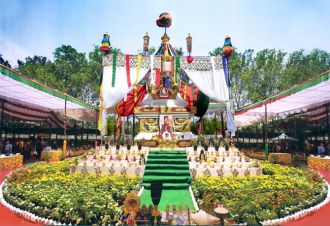 One of two most important events of the year took place on the 23rd May 2013, when the Cremation of the Kudung of His Holiness the Third Drubwang Penor Rinpoche was held in Namdroling Monastery in India. When the cremation stupa was opened some days afterwards, from inside the Kudung Choeten large bones that include the skull with the heart by its side and small bones from the fingers and toes were collected from the remains of the ashes. Work is commencing to build a stupa inside the Zangdok Pelri Temple at Namdroling Monastery, to house these precious relics. Ven. Lama Dondrup Dorje has arranged funds to help sponsor the construction of this stupa. The second most important event of year took place in December 2013, with the official announcement that H.H. Penor Rinpoche’s Yangsi (reincarnated being) has been recognised. 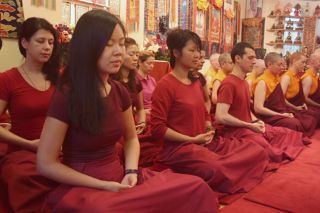 During the course of 2013, Ven. Lama Dondrup Dorje continued to travel the world propagating the Buddhadharma and supporting his many students around the globe; continuing the enlightened activity of his Root Guru, His Holiness Pema Norbu Rinpoche. During the summer months of July and August, Ven. Lama Dondrup Dorje remained in the UK, leading the entire programme of the Pathgate Summer Retreat which lasted nine weeks.

In Singapore, a new Pathgate Dharma Centre was opened in September. It is now being used as the main seat for all Dharma Teachings of Ven. Lama Dondrup Dorje in Singapore. It is also being used by local students in weekly Study Group practices.

In the UK, a new Shrine room has been constructed in a loft conversion at one of the Dharma Houses where a group of anis (nuns) live and practice. The spacious area of the new shrine room provided much needed room for the increasing number of female students staying at the Dharma House while attending teaching at the Pathgate Centre in Newcastle upon Tyne. 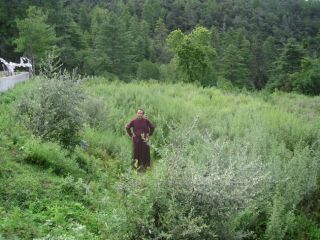 In Bhutan, a piece of land was procured and offered to Khenpo Sangay Wangdi, the former Principal of the Ngagyur Nyingma University at Namdroling Monastery, for a new retreat house to be built. This is the second time that Ven. Lama Dondrup Dorje has played a part in the setting up of retreat centres in Bhutan.

Over the years, Ven. Lama Dondrup Dorje has supported countless projects at Namdroling Monastery and Tsepal Tobkyed Hospital in South India. In July, a request for financial support was received from Doctor Ananthu, the principal medical physician of Tsepal Tobkyed Hospital, who was offered a place for higher studies at Stanford University in California, USA. Doctor Ananthu was the personal physician of HH Penor Rinpoche during the final month leading to His Holiness’s Parinirvana. He has also been wholeheartedly caring for the health of the thousands of monks and nuns of Namdroling Monastery for over four years. As a token of gratitude, HE Gyangkhang Tulku Rinpoche and HE Muksang Tulku Rinpoche, who are the heart sons of HH Penor Rinpoche, have come forward to offer part of the cost for the two years study needed by Doctor Ananthu, but the considerable, significant shortfall in funds would have prevented Doctor Ananthu from taking his place at the University. It is under these circumstances that Ven. Lama Dondrup Dorje was approached to sponsor the rest of the shortfall to ensure the doctor could take his place at Stanford University, before returning to work at the Namdroling T.T. Hospital in the future. 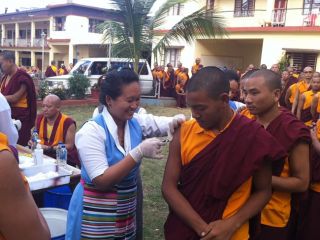 Another project, in response to a request from Tsepal Tobkyed Hospital, was the sponsorship of a Typhoid Vaccination Program for the entire ordained community of Namdroling Monastery in November.

Throughout 2013, the Pathgate Partnership Programme continues to support many on-going projects around the world that involve education and support for the children in India, Mongolia, Nepal, Bangladesh, and caring for the elderly and the homeless.

None of these projects would have been possible without the generous support from the students and friends of Pathgate Institute. If you wish to support the Pathgate Partnership Programme and become a Friend of Pathgate International, you may do so by clicking Make an Offering.